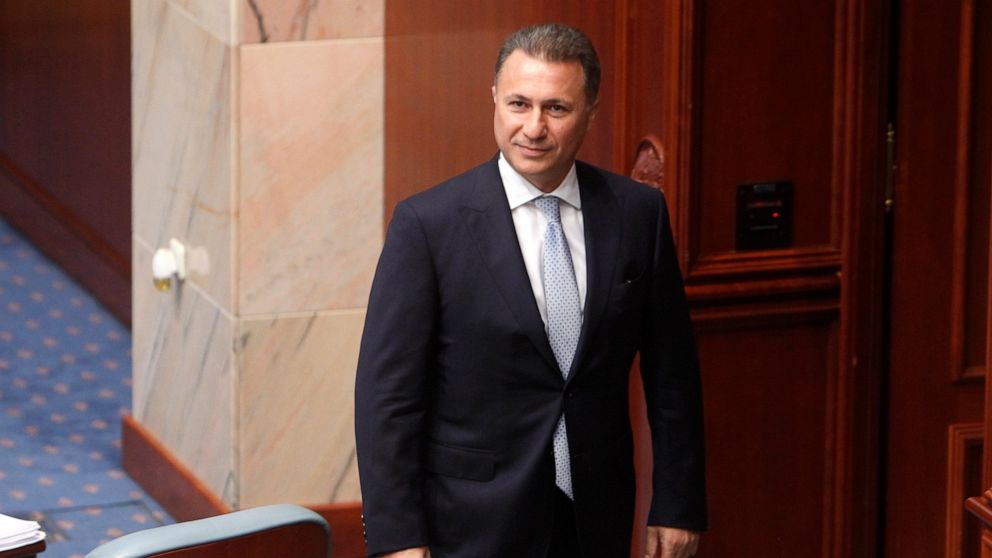 FILE – Nikola Gruevski, Macedonia’s former prime minister, looks on in parliament in the capital, Skopje, Oct. 19, 2018. A court in North Macedonia has imposed a new prison sentence on the country’s fugitive former prime minister Nikola Gruevski, this time a 6-year-term for abuse of power over the financing of his party’s headquarters in the capital, Skopje. (AP Photo/Boris Grdanoski, File)

SKOPJE, North Macedonia — A court in North Macedonia on Wednesday imposed a new prison sentence on the country’s fugitive former prime minister Nikola Gruevski, this time a six-year term for abuse of power over the financing of his party‘s headquarters in the capital, Skopje.

It was the fifth conviction for Gruevski since he left office in 2016 after a decade in power. He has denied any wrongdoing, claiming political persecution. Gruevski fled to Hungary in 2018 before his first sentence could be carried out and was granted asylum there.

On Wednesday, the country’s Criminal Court also ordered the confiscation of Gruevski’s conservative VMRO-DPMNE party’s eight-story central Skopje headquarters that were built during his time in office, and of dozens of other party properties.

The court ruled that Gruevski and another former VMRO-DPMNE official misused the services of a construction company that had been heavily involved in a separate, big government-run development scheme in central Skopje. It found that the company covered the entire 7-million-euro cost of the party headquarters as a donation to VMRO-DPMNE, in breach of party financing laws.

Gruevski was first convicted in 2018, of unlawfully influencing interior ministry officials over the purchase of a luxury armored car, and sentenced to two years in prison.

In 2020, he got another 1 1/2 years in prison for orchestrating violence against his political opponents in 2013. In April 2022, he was sentenced to 7 years for using party funds to enrich himself. A new, 9-year sentence followed later that month after a court ruled that he ordered the demolition of a multi-million-euro building belonging to a political rival in Skopje in 2011.

At least one more case is pending against Gruevski, for alleged corruption, election irregularities and abuse of office. These charges stem from a wiretapping scandal that broke in 2015, when it emerged that the phone conversations of more than 20,000 people had been illegally recorded, including those of politicians, judges, police, journalists and foreign diplomats.

The scandal brought down Gruevski’s government and he lost the subsequent 2016 election to the Social Democrat opposition party.