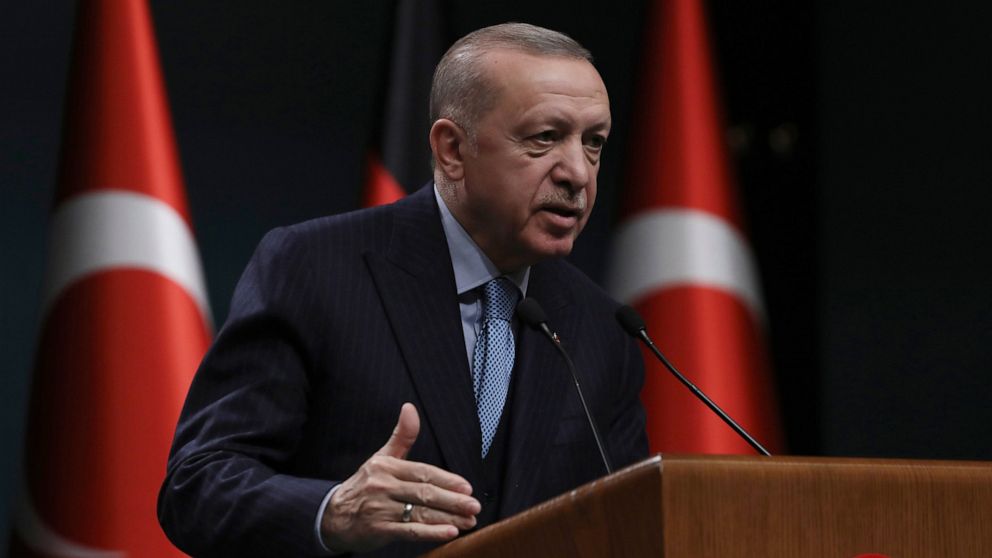 FILE – Turkey’s President Recep Tayyip Erdogan speaks during a news conference, in Ankara, Turkey on May 14, 2022. Within a two-week span, Turkey’s president has caused a stir by throwing a wrench in Sweden and Finland’s historic bid to join the NATO alliance, lashed out at NATO-ally Greece and announced plans for a new incursion into Syria. The Turkish leader appears to be using Turkey’s power to veto NATO’s expansion as an opportunity to air a variety of grievances against the Western nations and to force them to take action against Kurdish militants and other groups that Turkey views as terrorists.( AP Photo/Burhan Ozbilici, File)

ANKARA, Turkey — Turkish President Recep Tayyip Erdogan on Thursday warned Greece to demilitarize islands in the Aegean, saying he was “not joking” with such comments.

Turkey says Greece has been building a military presence on Aegean in violation of treaties that guarantee the unarmed statues of the islands. It argues that the islands were ceded to Greece on condition that they be kept demilitarized.

Greece argues that Turkey has deliberately misinterpreted the treaties regarding armed forces on its eastern islands and says it has legal grounds to defend itself following hostile actions by Ankara including a long-standing threat of war if it extends its territorial waters.

Erdogan’s warning comes amid a new escalation in tensions between the NATO allies that have a history of disputes over a range of issues such as mineral exploration in the eastern Mediterranean and rival claims in the Aegean Sea.

“We invite Greece to stop arming the islands that have non-military status and to act in accordance with international agreements,“ Erdogan said on the final day of military exercises that were taking place near Izmir, on Turkey’s Aegean coast. “I’m not joking, I’m speaking seriously. This nation is determined.”

“We warn Greece to stay away from dreams and actions that it will regret, and to come to his senses,” Erdogan said. “Turkey won’t give up on its rights in the Aegean, in the same way that it will not stand back from using its rights stemming from international agreement.”