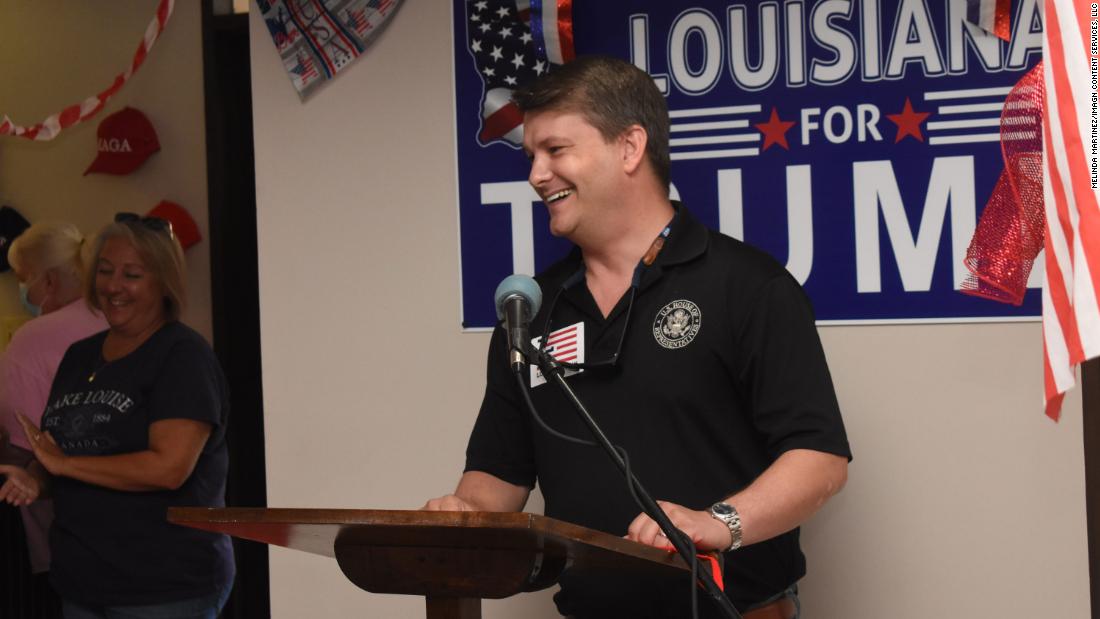 “Congressman-elect Luke Letlow, 41, passed away this evening at Ochsner-LSU Health Shreveport due to complications from COVID-19,” Letlow spokesman Andrew Bautsch wrote in a post on the Republican congressman-elect’s Facebook page.

Letlow’s family, he said, “appreciates the numerous prayers and support over the past days but asks for privacy during this difficult and unexpected time.”

Letlow had announced his diagnosis on his Facebook page on December 18, writing that he was “at home resting, following all CDC guidelines, quarantine protocols, and the recommendations of my doctors.”

Days later, Letlow posted that he was undergoing treatment at St. Francis Hospital in Monroe before a statement from his office on December 23 said he had been transferred to Ochsner LSU Heath Shreveport Academic Medical Center.

Dr. G.E. Ghali, the chancellor of LSU Health Shreveport, said in a statement at the time that Letlow was in “stable condition in the Intensive Care Unit” and was receiving the drug Remdesivir and steroids as part of his treatment.

News of Letlow’s death was met with an immediate outpouring of support for the congressman-elect’s family.

“Luke Letlow is now with our Creator, but his premature departure from this world is a huge loss to Louisiana and America. Just weeks ago, voters overwhelmingly chose Luke to represent them in Congress,” Rep. Garret Graves, a Republican of Louisiana, tweeted.

“They saw what so many of us know of Luke – kind, smart, quick-witted, God-fearing, hard-working, honest and just a good guy.”

That message was echoed by New Orleans Mayor LaToya Cantrell, a Democrat, who said in a tweet, “We are heartbroken to learn of the passing of Congressman-elect Luke Letlow.”

“He was a promising young leader who loved Louisiana deeply. Our prayers go out to his family and loved ones.”

Louisiana GOP Sen. John Kennedy similarly tweeted that he was “heartbroken” by the news.

“For years, Luke has served LA tirelessly. More than that, Luke was a loving husband and father,” Kennedy said. “Please join us in praying for the Letlow family during this time of incredible loss.”

The Republican Party of Louisiana also praised Letlow as a “rising political star and a good friend” in a statement Tuesday evening.

Louisiana Democratic Gov. John Bel Edwards ordered that flags in the state be flown at half-staff on the day of Letlow’s funeral.

Under Louisiana state law, a special election will now take place to elect someone to represent the state’s 5th Congressional District, which Letlow had carried in a runoff election earlier this month with 62% of the vote. The district is heavily Republican and encompasses much of eastern Louisiana.

December is already the country’s deadliest month since the pandemic began.

The United States reported 124,686 coronavirus patients in hospitals Tuesday, the most reported on a given day during the pandemic, according to the Covid Tracking Project.

The country’s proportion of ICU patients who have coronavirus also has shot up, from 16% in September to 40% last week, according to the US Department of Health and Human Services.

This story has been updated with additional reaction and reporting on Letlow’s passing.