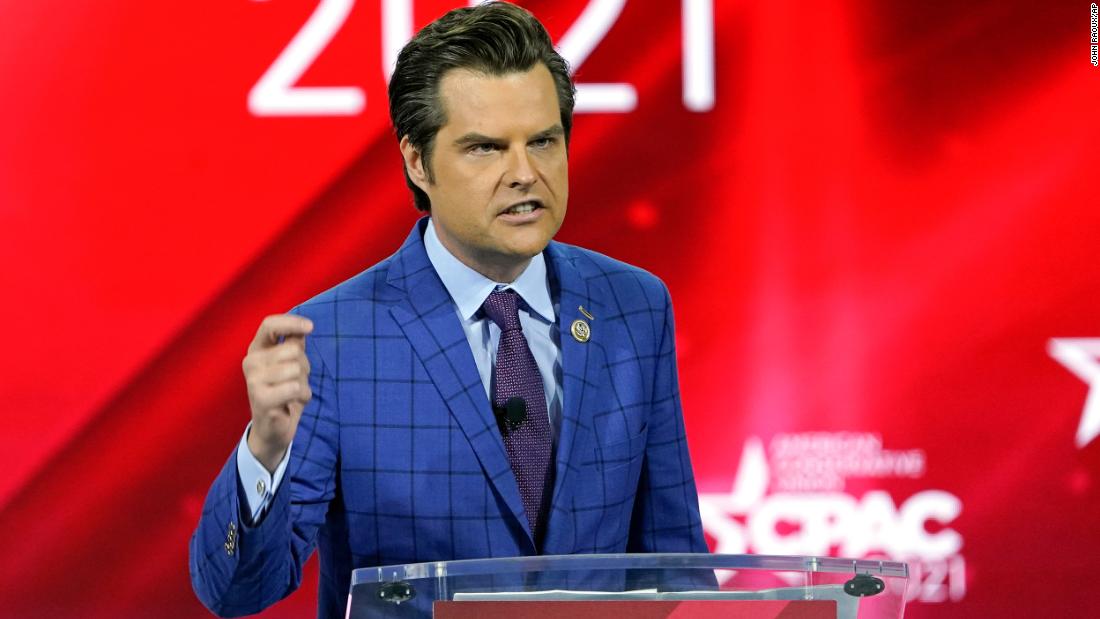 Early in the Friday proceedings, CPAC played a video segment that strongly suggested there was mass fraud or widespread malfeasance in the 2020 election.

The segment was titled “YOUR VOTES CANCELED.” Among other things, it suggested there was something nefarious about the fact that Joe Biden gained ground late on election night in vote-counting in swing states — showing one commentator saying this was “statistically impossible,” another saying it was “very strange,” and another, the late radio host Rush Limbaugh, saying the “vote fairy” had visited overnight. 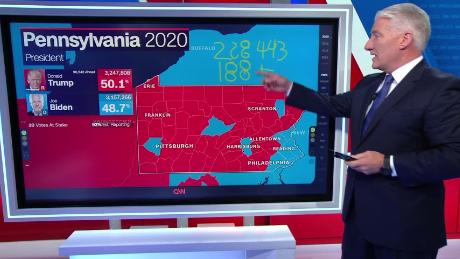 Facts First: This is nonsense, as CNN and many others have repeatedly explained since November. Biden gained ground in the vote count in some states as legitimate votes were legitimately counted.
Biden simply did far better than Trump with people who voted using mail-in ballots, which some states counted later than they counted in-person ballots. (In Pennsylvania, for example, this happened in part because Republican state legislators refused to allow the processing of mail-in votes to begin before Election Day as Democrats proposed.) Biden also did far better than Trump in most big cities, which had more ballots to count than smaller communities.
Biden did not gain ground late at night in every competitive state. In Florida, where counties were allowed to start counting mail-in ballots prior to Election Day, Biden jumped out to what ended up being a mirage of a big lead, but Trump overtook him after in-person votes were counted. In Arizona, Trump gained ground as the counting proceeded past Election Day, though he still ended up losing.

The legitimacy of the election

TW Shannon, a former Republican state legislator in Oklahoma, said that mobs occur “when people have a sense of hopelessness.” After claiming that Democratic mayors had failed to offer hope to the people who ended up burning cities in the summer of 2020, Shannon then said, “The reason that people stormed the Capitol was because they felt hopeless because of a rigged election.”

Facts First: The election was not rigged. Joe Biden was the legitimate winner. There is no evidence of widespread fraud or malfeasance.

Shannon would have been correct if he had said that many of the people who stormed the Capitol believed the election had been rigged. But that’s not what he said.

Conservative commentator Deroy Murdock said: “Democrats, not Republicans, installed ballot drop boxes on sidewalks, where nobody oversaw them. How many fraudulent ballots got deposited in these boxes unchecked and then got counted? Who knows.”

Facts First: Murdock’s suggestion that ballot drop boxes were insecure is false; there is no sign that these drop boxes were used fraudulently in the 2020 election. The boxes were secured in various ways: affixed to the ground, designed with anti-tampering measures, and, in many cases, subjected to 24-hour video surveillance. Also, some states and counties run by Republicans made use of ballot drop boxes.

In addition, states and counties employed various security measures to ensure the legitimacy of the ballots that were deposited in the boxes. Even if drop boxes are hypothetically tampered with, ballots themselves still have to pass the usual checks once they arrive at an elections office.

Who perpetrated the attack on the Capitol

Talking about the attack on the Capitol, conservative radio host Wayne Dupree said there were “a lot of people there — Antifa was there, BLM was there, MAGA people were there, everybody was there. And if Joe Biden wants to talk unity, there was unity there on that day, because America is sick and tired of being pushed down.”

Facts First: Dupree was wrong to suggest the attack on the Capitol was conducted by a united hodgepodge of political activists from left-wing and right-wing movements. In reality, the insurrection was overwhelmingly perpetrated by supporters of Donald Trump.

We know this from videos taken on the day of the attack, social media postings by participants in the attack, and court documents filed by the FBI afterward. The FBI has said that there is no indication that Antifa members disguised themselves as Trump supporters that day.
We can’t speak definitively about the political positions of every single person who was involved in the mob, and the ideology of some alleged participants can be hard to pinpoint. (One of them, who has a unique political history, had previously used the hashtags #antifa and #blm on social media, though he has denied actually being part of the Antifa movement.) But it is abundantly clear that the vast majority were Trump supporters.

Lankford later echoed Lee’s insinuation of California’s hypocrisy, stating that California is a place “where you can go to swanky restaurants but not to church.”

Currently, California residents can go to places of worship which choose to open, though indoor capacity is limited. The state did initially ban indoor church services in counties considered at widespread risk of coronavirus transmission but after the US Supreme Court ruled partially in favor of the churches on February 5, California had to revise its guidelines. According to the latest guidance, places of worship must limit indoor attendance to 25% of capacity. The state’s Covid-19 website also notes that church capacity can be expanded to 50% of building capacity based on the tier of coronavirus threat the state is experiencing. Singing and chanting is allowed if performers wear masks and maintain distance.
Lee and Lankford’s argument for hypocrisy references California Gov. Gavin Newsom’s attendance at an event with a dozen people at Michelin-starred restaurant The French Laundry, for which he was widely criticized. According to photos obtained by Fox 11 in Los Angeles, Newsom and the other guests were sitting on the restaurant’s outdoor patio but none of them were wearing a mask despite being in close proximity.
Newsom apologized for his behavior and the decision to dine out at the restaurant when he announced new coronavirus restrictions later that month, moving all counties to the strictest tier. Newsom’s behavior at The French Laundry would have violated the guidance for face coverings included in the new restrictions. Under the new guidelines, diners may only remove their masks if they are “actively eating or drinking” and are at least six feet away from anyone not in their household.

Biden’s comments on China and the Uyghurs

Robby Starbuck, who is running for Congress in Tennessee, castigated Biden for comments he claimed Biden made during a CNN town hall earlier this month.

“They did something that I — I never thought CNN would do, but they asked him about the Uyghurs in China who are being raped, tortured, and children are being kidnapped, forced to praise China as their mother and to praise communism as their savior. They asked Joe Biden about it, and he said it amounted to a mere cultural difference,” Starbuck said.

Starbuck added, “I don’t think that more disgusting words have ever left the lips of an American president.”

When Anderson Cooper asked, “What about the Uyghurs? What about the human rights abuses in China?” Biden responded, “We must speak up for human rights. It’s who we are.” Biden said he pointed out to Chinese President Xi Jinping on their February phone call that “no American president can be sustained as a president if he doesn’t reflect the values of the United States. And so the idea I’m not going to speak out against what he’s doing in Hong Kong, what he’s doing with the Uyghurs in western mountains of China …”

Biden soon continued, “And by the — he said he — he gets it. Culturally, there are different norms that each country and they — their leaders — are expected to follow.”

Biden’s comments were a bit muddled. In context, though, he seemed to be saying that Xi understands that, given the different cultural norms for each country’s leader, there is a cultural norm for an American president to speak out on human rights issues. And given that Biden had just said that “we must speak up for human rights” and speak out against “what he’s doing with the Uyghurs,” Starbuck’s account of Biden’s response to Cooper left out essential information.

Misleading descriptions of Biden’s remark have circulated widely among conservatives on social media.

The Muppets and the left

Mocking the left, Donald Trump Jr. said, “This month alone, they’ve banned The Muppets. And then if there’s things you thought were sort of above cancellation, you would be wrong. There is nothing the radical left won’t cancel.”

Facts First: Trump Jr. was wrong; The Muppets have not been banned. In fact, the Disney+ streaming service just this month started to offer “The Muppet Show,” which originally aired from 1976 to 1981. Trump Jr. might have been referring to the fact that Disney+ added a content disclaimer at the beginning of 18 episodes and is not airing two other episodes — but neither of these moves can be fairly described as a ban on The Muppets.
The content warning says that the episodes include “negative depictions and/or mistreatment of people or cultures,” and “these stereotypes were wrong then and are wrong now,” the Los Angeles Times reported. The notice goes on to say: “Rather than remove this content, we want to acknowledge its harmful impact, learn from it and spark conversations to create a more inclusive future together.”
The Times reported that “each episode bears the 12-second disclaimer for a different reason, from (Johnny) Cash’s appearance singing in front of a Confederate flag to negative depictions of Native Americans, Middle Easterners and people from other cultures.”
The Times reported that two episodes from the final season of the show were left off Disney+ altogether, while Entertainment Weekly noted that assorted other songs and sketches were omitted. It is not clear that any of these omissions were related to culturally sensitive content; Entertainment Weekly noted that one of the two episodes starred someone who was later convicted of possessing child pornography, while other omissions might have been related to challenges securing music rights.

Voting around the world

During a panel on protecting elections, Republican attorney Jesse Binnall, who tried to overturn the election results in Nevada on behalf of the Trump campaign, claimed, “The rest of the world almost exclusively does voting in person because of the opportunities for fraud in mail-in voting.”

Facts First: Binnall is wrong about the voting habits of other countries.

Approximately 1/4 of countries use mail-in voting, according to the Pew Research Center. A survey of experts by the Electoral Integrity Project, run by researchers at Harvard University and Sydney University, found that of the 166 countries for which data was available, 40 used postal ballots even before the Covid-19 pandemic.
According to the Electoral Integrity Project analysis, postal ballots were most widely used in North America and Europe. Around 1/3 of European countries have some form of mail-in voting, based on an October 2020 report issued by the International Institute for Democracy and Electoral Assistance, an intergovernmental organization aimed at advancing democracy worldwide.
CNN has also repeatedly fact-checked previous false claims about mail-in voting and fraud. In the United States, evidence of mail ballot fraud is exceedingly rare. While there are some vulnerabilities, states have systems and processes in place to prevent forgery, theft and voter fraud.