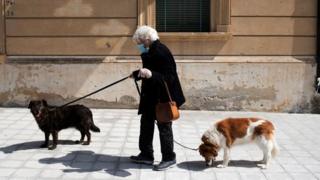 EU talks on how to help southern Eurozone countries badly affected by the coronavirus epidemic have stalled after 16 hours.

European finance ministers were close to a deal, but the talks broke down amid a dispute between Italy and the Netherlands over how to apply the recovery fund.

Negotiations will resume on Thursday.

The coronavirus pandemic has exposed deep divisions in Europe, where Italy and Spain have accused northern nations – led by Germany and the Netherlands – of not doing enough.

European Commission First Vice-President Frans Timmermans criticised the Dutch response, warning that “the EU as we know it will not survive this” if the split continued.

“Everyone now needs to appreciate the need for solidarity,” the former Dutch minister wrote in De Volkskrant, arguing for “new instruments… [to] show that in Europe too the strongest shoulders bear the heaviest burdens “.

Spanish Prime Minister Pedro Sánchez has similarly warned the bloc could “fall apart” if a solution cannot be found.

The European Research Group’s Scientific Council said later that its members had “unanimously” called for his resignation nearly two weeks ago, alleging that Prof Ferrari had not taken part in important meetings and had spent too much time in the US.

Why did the EU talks break down?

Italy, Spain, France and some other EU states want to share out coronavirus-incurred debt in the form of “coronabonds” (or eurobonds) – mutualised debt that all EU nations help to pay off.

An all-night teleconference between Eurozone finance ministers to discuss this started on Tuesday and went on for 16 hours, but Italy refused to back down on its demands.

The Netherlands opposes the proposal, and wants member states to have repayment conditions phased in over the years.

For now, a draft text of what has been agreed states that “innovative financial agreements” will need to be used.

The meeting’s chairman, Portuguese Finance Minister Mario Centeno, said he had suspended the talks until Thursday but was still seeking a strong safety net against the effects of the virus.

The French and German finance ministers urged colleagues to continue to seek a solution. In a tweet (in German), Germany’s Olaf Scholz called for EU states to stand together and find a “good compromise”.

The BBC’s Gavin Lee in Brussels says that essentially the issue is one of trust over whether Italy and Spain will eventually pay back what has been borrowed so that other countries are not financially exposed.

Some from these hard-hit nations have been angered by a perceived indifference from other EU states.

The Dutch and their allies want to use an existing bailout fund known as the European Stability Mechanism (ESM).

“Because of the current crisis we have to make an exception and the ESM can be used unconditionally to cover medical costs,” said Dutch Finance Minister Wopke Hoekstra. “For the long term economic support we think it’s sensible to combine the use of the ESM with certain economic conditions.”

Italy remains at the centre of the crisis in Europe, with the highest death toll – more than 17,000; next comes Spain, with nearly 14,000 deaths, Johns Hopkins University data shows.

Even before the economic damage of this crisis, Italy’s public debt was 133% of its GDP (total output), or about $2.3tn (£2tn) – the highest in the eurozone after Greece.

Germany wants to set up an EU rescue fund and lend using mechanisms established during the financial crisis of a decade ago.

This week, a group of Italian mayors and other politicians bought a page in Germany’s Frankfurter Allgemeine Zeitung newspaper to remind Germany that it was never made to pay back its debts after World War Two.

Public opinion has also been shifting in Germany.

Economists, politicians and commentators who once railed against mutualising eurozone debt to bail out Greece amid the last financial crisis are calling for exactly that to help Southern Europe deal with the coronavirus.