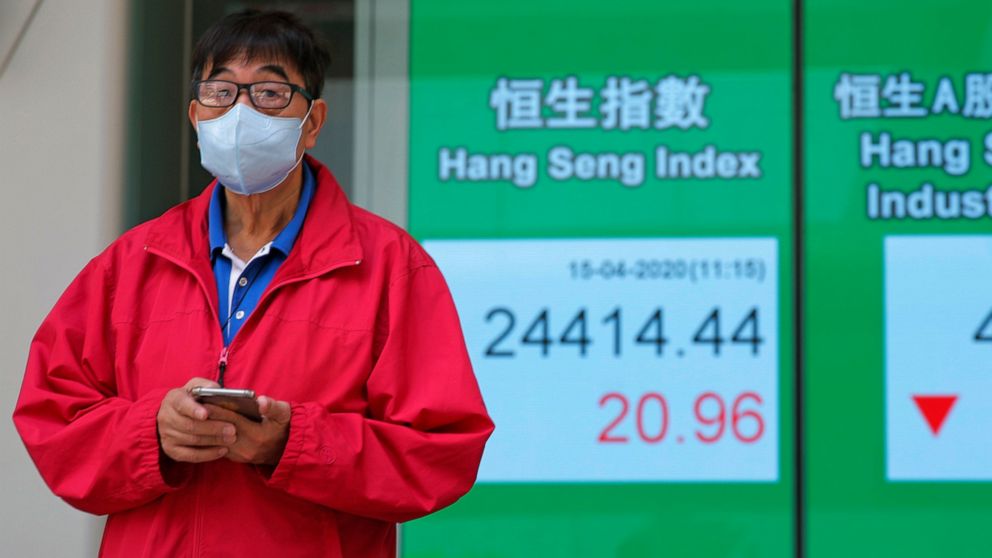 Asian stocks are mostly lower after weak U.S. retail and manufacturing added to global gloom over the impact of the coronavirus pandemic

BEIJING — Asian stocks were mostly lower Thursday after unexpectedly weak U.S. retail and other data added to gloom about the impact of the coronavirus pandemic.

On Wall Street, the benchmark S&P 500 index sank 2.2% after the U.S. government reported last month’s retail sales plunged by a record 8.7% and factory output fell at the fastest rate for March since 1946. The retail figures hit especially hard because consumer spending makes up two-thirds of the U.S. economy.

The announcements shook investors who economists have warned are too optimistic about a quick rebound from what is shaping up to be the deepest global slump since the Great Depression of the 1930s.

“Boy, were U.S. data a rude awakening,” said Riki Ogawa of Mizuho Bank in a report.

Any notion of a “V-shaped recovery” once anti-virus controls are lifted “is now being questioned more seriously,” Ogawa said.

The U.S. sales decline exceeded the previous record decline of 3.9% that took place during the depths of the Great Recession in November 2008.

Spending may be falling at an even faster pace than retail figures suggest. Those data don’t include spending on services such as hotel stays, airline tickets or movie theaters, industries that have been largely shut down by anti-virus controls.

Also Wednesday, the Federal Reserve Bank of New York said its gauge for manufacturing in New York state fell by its biggest monthly margin in April. The index is at its lowest level on record.

Traders say stocks will be volatile until investors can see more clearly when countries might be able to stop the outbreak.

Investors are focusing on how and when authorities may begin to ease business shutdowns and limits on people’s movements.

President Donald Trump has been discussing how to roll back federal social distancing recommendations. U.S. governors are collaborating on plans to reopen their economies in what is likely to be a gradual process to prevent the coronavirus from rebounding.

China has reopened factories, shops and other businesses after declaring victory over the outbreak, but forecasters say it will take months for industries to return to normal output, while exporters will face depressed global demand.

With millions of job losses worldwide, “the more lasting damage to confidence and labor market shocks is also being under-estimated, and these may not recover ion tandem with the pandemic,” said Mizuho’s Ogawa.