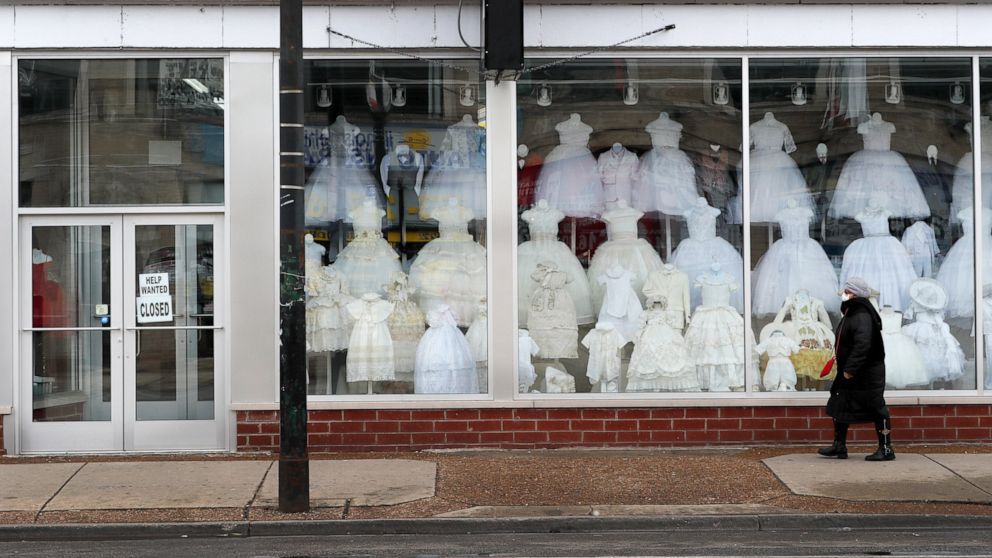 WASHINGTON — Government relief checks began arriving in Americans’ bank accounts as the economic damage to the U.S. from the coronavirus piled up Wednesday and sluggish sales at reopened stores in Europe and China made it clear that business won’t necessarily bounce right back when the crisis eases.

With many factories shut down, American industrial output shriveled in March, registering its biggest decline since the U.S. demobilized in 1946 at the end of World War II. Retail sales fell by an unprecedented 8.7%, with April expected to be far worse.

The world’s biggest economy began issuing one-time payments this week to tens of millions of people as part of its $2.2 trillion coronavirus relief package, with adults receiving up to $1,200 each and $500 per child to help them pay the rent or cover other bills. The checks will be directly deposited into accounts or mailed to households in the coming weeks, depending on how people filed their tax returns.

Among those receiving a check was Jacqueline Gonzalez, a 32-year-old single mother who was laid off from her job as a bartender and lives with her mother, a teacher, in Miami Lakes, Florida. Gonzalez paid her car insurance and gave her mother $500 for rent. She has signed up for food stamps.

“There is no other form of income for us right now. We have no other choice. We can’t work from home,” she said. “We’re just sitting here. Bills are racking up.”

In an unprecedented move, President Donald Trump’s name will be printed on the paper checks. Still, in some places under stay-at-home orders, frustrations began to boil over among those worried the economic toll is more crushing than the virus itself.

And elsewhere around the world, the first steps in lifting economically crippling restrictions are running into resistance, with customers staying away from the reopened businesses and workers afraid of risking their health.

In China, millions are still wary of spending much or even going out. Some cities have resorted to handing out vouchers and trying to reassure consumers by showing officials in state media eating in restaurants.

“I put off plans to change cars and spend almost nothing on eating out or entertainment,” said Zhang Hu, a truck salesman in Zhengzhou who has gone back to work but has seen his income plummet because few people are buying 20-ton rigs. “I have no idea when the situation will turn better.”

In Austria, Marie Froehlich, who owns a clothing store in Vienna, said her staff was happy to be back after weeks cooped up at home. But dependent largely on tourism, which has dried up amid the travel restrictions, she expects the business will take months to return to normal.

“Until then, we are in crisis mode,” she said.

Rome’s streets were also largely deserted despite the reopening of some stores.

Worldwide, deaths have topped 130,000 and confirmed infections 2 million, according to the tally kept by Johns Hopkins University. The figures understate the true size of the crisis, in part because of limited testing, different ways of counting the dead, and concealment by some governments

The U.S. has recorded approximately 28,000 deaths — highest in the world — and over 600,000 confirmed infections, by Johns Hopkins’ count. Still, the nightmare scenarios projecting a far greater number of deaths and hospitalizations have not come to pass, raising hopes from coast to coast.

— An investigation by The Associated Press found that six days of delays by China in alerting the public to the growing danger in mid-January set the stage for the global disaster.

— Millions of South Koreans wore masks and maintained social distancing as they voted in parliamentary elections, with turnout surprisingly high. The government resisted calls to postpone the balloting, seen as a midterm referendum on President Moon Jae-in.

— The death toll in Iran is probably almost twice the official figure of about 4,800 as a result of undercounting and because some patients were not tested, a parliamentary report said. The explosive allegation was buried in a footnote in the 46-page document.

— With deaths and hospitalizations stabilizing or dropping in Europe, Germany announced plans to let smaller shops reopen next week and for school to resume in early May. France reported a decrease in hospitalized COVID-19 patients for the time since the outbreak began there.

— New York Gov. Andrew Cuomo said people must wear face coverings when they are near others, such as on the street or subway platforms.

The economic damage from the effort to “flatten the curve” of infections has mounted alarmingly.

While grocery store sales in the U.S. jumped nearly 26% in March as Americans stocked up on food and other goods, auto sales plummeted by one-quarter and clothing store sales slid by more than half, the government reported. The category that mostly includes online shopping rose more than 3%.

“Clear signs of panic buying of necessities and the fact that lockdowns were introduced only around the middle of the month means that far worse is to come in April and the second quarter more generally,” said Michael Pearce, an economist at the consulting firm Capital Economics.

As of last week, some 17 million Americans had been thrown onto the unemployment rolls.

At least one state, California, is providing its own stimulus to residents: Gov. Gavin Newsom announced $500 payments for individuals, including people among the state’s estimated 2 million immigrants who are in the country illegally and ineligible for the federal payouts.

A day after Nevada Gov. Steve Sisolak said his state’s idled economy was nowhere near a restart, Las Vegas Mayor Carolyn Goodman made an impassioned plea for reopening her city, saying it is withering with tourists staying home and conventions and businesses closed.

“The longer we wait to do this, the more impossible it will become to recover,” Goodman said.

In Lansing, Michigan, hundreds of honking, flag-waving protesters drove past the Capitol in a snowstorm, bringing traffic to a near-standstill. “Gov. Whitmer We Are Not Prisoners,” one sign read, while another declared, “Michigander Against Gretchen’s Abuses.”

“This arbitrary blanket spread of shutting down businesses, about putting all of these workers out of business, is just a disaster,” said Meshawn Maddock, a member of the Michigan Conservative Coalition, which organized the rally. “And people are sick and tired of it.”

Whitmer said she was “really disappointed” to see protesters close together without masks.

“I saw someone handing out candy to little kids barehanded. … We know that this rally endangered people,” Whitmer said. “This kind of activity will put more people at risk and, sadly, it could prolong the amount of time we have to be in this posture.”

Where pushback is mounting, it’s happening regardless of political affiliation. Sisolak and Whitmer are Democrats; in Ohio, it’s Republican Mike DeWine who faces growing pressure to reopen the state and allow even nonessential businesses to resume.

Foreign leaders, meanwhile, rushed to the defense of the World Health Organization after Trump vowed to halt U.S. payments to the U.N. agency for not sounding the alarm over the virus sooner.

EU foreign policy chief Josep Borrell said the WHO is needed now more than ever: “Only by joining forces can we overcome this crisis that knows no borders.”

Kennedy reported from Fort Lauderdale, Florida. Associated Press journalists around the world contributed to this report.