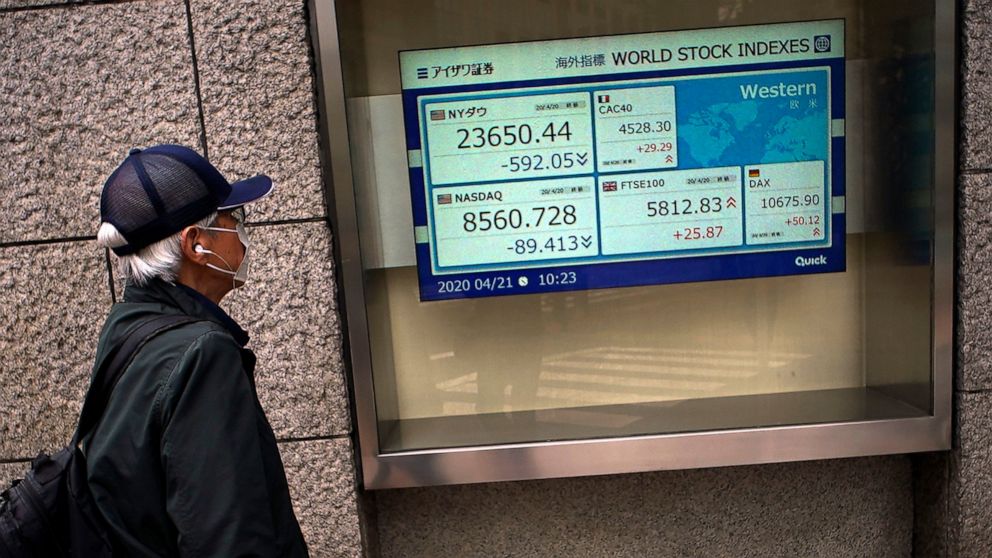 Share prices are down around the world after the price of U.S. crude oil plunged below zero

The extreme volatility in energy markets highlighted investors’ broad concerns about the duration of the pandemic and its impact on the economy, weighing on financial markets more broadly.

A growing glut of oil is pushing storage capacity to its limits, leading to unprecedented drops in crude markets.

The U.S. benchmark’s settled at negative $37.63 per barrel on Monday and on Tuesday, the cost to have a barrel of U.S. crude delivered in May was at negative $7.40 per barrel.

When trading of contracts for U.S. oil to be delivered in May expire on Tuesday, the earliest delivery available will be for June. Analysts consider the June contract to now be closer to the “true” price of crude.

The tumult in the oil market mirrors volatility in many others and reflects uncertainty over where the world economy will head as governments begin to loosen controls imposed to contain the coronavirus.

“We could merely be in the eye of the hurricane as the epicenters of its rage remain centered around demand devastation and crude oil oversupply,” Stephen Innes of AxiCorp. said in a commentary.

“At a minimum, oil prices will be the last asset class to recover from lockdown” and only when travel restrictions are lifted, he said.

“The historic drop in WTI prices is an indication of the downward pressure which many other crude oil grades could face, given the oversupply situation,” Sushant Gupta of Wood Mackenzie said in a report.

On the bright side, given the very low prices right now, “It also provides an opportunity for large consuming nations in Asia such as China and India to expedite filling up their petroleum reserves.”

In stock markets, while share prices have gradually stabilized after wild swings earlier this year, uncertainty over growing numbers of coronavirus cases in Japan and in some Southeast Asian countries has left investors wary about new waves of infections.

In a sign of continued caution in the market, Treasury yields remained extremely low. The yield on the 10-year Treasury slipped to 0.57% from 0.62% late Monday.