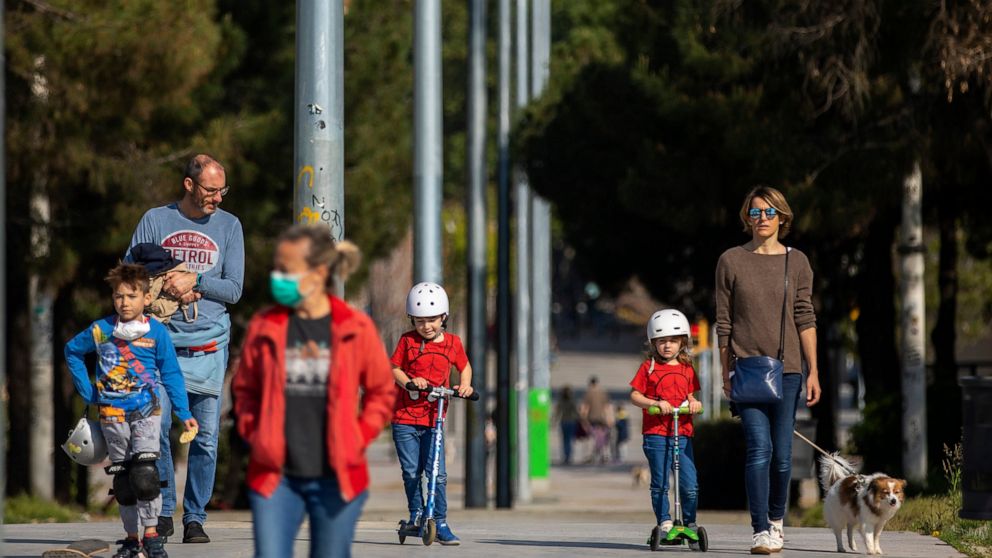 The Latest on the coronavirus pandemic. The new coronavirus causes mild or moderate symptoms for most people. For some, especially older adults and people with existing health problems, it can cause more severe illness or death.

TOP OF THE HOUR:

— Pelosi: US governors are right to feel impatient about financial help from Congress.

NEW YORK — Gov. Andrew Cuomo says the 367 deaths from the coronavirus that he reported Sunday were “horrific,” but the number was less than half the nearly 800 deaths that occurred in a single day during the pandemic’s peak in New York.

It is the first time this month that the statewide daily death toll has been below 400.

Cuomo also reports that the number of hospitalizations, which still topped 1,000, and the number of individuals put on a ventilator had dropped as well.

The deaths include 349 patients who died in hospitals and 18 individuals who died in nursing homes, the Democratic governor said.

On Saturday, Cuomo said there were 437 deaths on Friday.

WASHINGTON — U.S. House Speaker Nancy Pelosi says the nation’s governors are rightfully feeling impatient about getting financial help from Congress during the coronavirus outbreak and insists the aid will come.

The California Democrat tells CNN’s “State of the Union” that governors “should be impatient. Their impatience will help us get an even bigger number” in the next congressional relief package. Pelosi has already pledged to provide them billions in aid.

With much of the American economy shuttered during the pandemic, state and local governments are reeling from declining sales tax revenues and surging unemployment benefit costs.

But Pelosi says people should judge the latest federal aid package “for what it does. Don’t criticize it for what it doesn’t, because we have a plan for that. And that will happen.”

ROME — Italy has registered its lowest day-to-day increase in deaths of those infected with COVID-19 since the country was in its first week of lockdown in mid-March.

The Health Ministry released new figures, including 260 deaths, for the 24-hour period ending Sunday. That daily grim statistic was last lower on March 14, when 175 deaths were registered.

Premier Giuseppe Conte says on Facebook that later Sunday he will address the nation, eager to learn which restrictions will be eased in Italy’s lockdown, which expires May 3.

Overall, Italy has registered 26,644 deaths of those with known coronavirus infections.

But the toll could be considerably higher, since many persons who died in their homes or in care residences for the elderly in recent weeks didn’t receive COVID-19 tests.

By late March, when the outbreak was raging, most devastatingly in the north, Italy’s day-to-day tally of new deaths had soared to nearly 1,000. Italy now has totaled 197,675 known cases, after 2,324 new cases were registered on Sunday.

DUBAI, United Arab Emirates — Saudi Arabia signed a deal worth more than $264 million with China to provide the kingdom with the ability to conduct 9 million COVID-19 tests.

The deal signed Sunday and announced by Saudi Arabia also provides the kingdom with 500 personnel to conduct the tests in six laboratories that will be established across the country.

Saudi Arabia says the agreement with China’s BGI Group indicates the kingdom is “in a race against time to diagnose cases and to work to isolate them.” The contract also includes conducting comprehensive community testing, genetic mapping of a number of samples in the kingdom, and analysis of immunity mapping from 1 million samples.

Saudi Arabia has also signed agreements with companies in the U.S., South Korea and Switzerland with the aim of testing 40% of people in the country. More than 17,000 confirmed cases of the virus have been reported in Saudi Arabia, including more than 130 deaths.

COLUMBIA, S.C. — Officials in South Carolina expressed appreciation Sunday for the 1.5 million surgical masks sent from China that are needed to stem the new coronavirus outbreak.

But U.S. Sen. Lindsey Graham also called for a lessening of U.S. reliance on China.

“We want the masks made in the United States,” Graham said during an availability on the tarmac of the Greenville-Spartanburg Airport. He watched the unloading of the masks from a Boeing aircraft.

“We don’t want to ever have to rely on China or anyone where for our basic health care needs.”

Throughout the new coronavirus outbreak, Graham has repeatedly called for a draw-down of U.S. reliance on China. He tweeted earlier this month he wanted the U.S. response over the outbreak “so overwhelming China will change its behavior.”

The Republican also told Fox News he felt the U.S. “should send China a bill for the pandemic.”

Noting he expected a resurgence of the virus in the fall, Graham said Sunday he wanted the U.S. to be “much better prepared” in terms of needed supplies by the time that happens.

“The medical supply chain is coming back to America,” he said.

U.S. Rep. William Timmons echoed Graham’s comments, saying of the necessity of a mask shipment from China: “This will not happen again.”

WASHINGTON — The chairman of the company that includes the Expedia travel business says the coronavirus outbreak has done catastrophic damage to the U.S. economy and a lack of leadership from Washington is hampering the response.

Expedia Group Chairman Barry Diller says business bankruptcies will be widespread and that President Donald Trump’s prediction that the economy will begin to rebound by summer is unrealistic.

“The damage that’s being done is catastrophic,” Diller said.

He added that he expects Americans will begin to return to work in large numbers by Labor Day in early September. He said the summer would be a “big mess” as companies try different approaches to reopening.

He said the federal government has to step up its response with clear, science-based instructions about whether Americans can resume normal activities and under what restrictions.

“Unfortunately, we have a witch doctor as president and he ain’t gonna tell us,” Diller said on CBS’ “Face the Nation.”

COLOMBO, Sri Lanka — Sri Lanka government has canceled the leave of three forces and ordered them to report to duty immediately amid a surge of patients infected with the new coronavirus.

The government announced Sunday that a countrywide curfew will be re-imposed Monday “in order to facilitate officers of the security forces who are on leave to report back to their respective camps.”

The government’s order comes as the number of infected navy sailors rose to 95 by Sunday. The total positive cases went up to 485, while seven have died from the virus.

Eleven new patients were reported on Sunday and 10 were navy sailors.

According the orders issued by the defense ministry, the leave and short passes granted to all officers and others ranks of the three forces were cancelled with immediate effect and they were directed to report to their respective camps immediately.

On Friday, 30 navy sailors from a navy camp on the outskirt of capital Colombo tested positive and the number has now gone up to 95 while the camp is now isolated.

The virus is believed to have entered the camp through navy sailors deployed to search a group of narcotics addicts who had contact with a COVID-19 patient and were evading quarantine.

Sri Lanka partially lifted a monthlong curfew last week. The country had been under a 24-hour curfew since March 20. It was lifted during daytime hours in more than two thirds of the country last week. In those areas, curfew remained in effect from 8 p.m. until 5 p.m ad it was scheduled to be relaxed on Monday.

Police strictly enforce curfew and have arrested more than 35,000 of curfew violators.

ATHENS, Greece — Greek authorities say there have been four new fatalities from COVID-19 in the past 24 hours to raise the total to 134.

There are 11 new confirmed cases of the disease, which brings the total to 2,517. The number of people on ventilators declined to 46, while 64 patients have exited intensive care.

Prime Minister Kyriakos Mitsotakis is likely to postpone his broadcast to the Greek people announcing a gradual relaxation of quarantine measures. The broadcast had been tentatively scheduled for Monday, but it will likely be postponed by at least one day.

BERLIN — Authorities are testing the 450 residents of an apartment complex in a German town because two families infected with the new coronavirus failed to follow quarantine rules.

Residents of the 117-apartment complex in Grevenbroich in western Germany were being tested Sunday.

Authorities fenced off the grounds over the weekend and security was put in place to ensure residents only leave once test results are completed. The results are expected Tuesday.

News agency dpa reported the local government said the tests were triggered after authorities determined that eight people from two families who had tested positive had continued to see neighbors and been outside the building.

It wasn’t clear whether other residents had been aware the families were supposed to be in quarantine.

The families themselves were taken to another location where officials could ensure that they kept to their quarantine.

The tests are voluntary but authorities can order anyone who refuses to undergo one to remain in quarantine for 14 days.

MINSK, Belarus — Local officials in Belarus, which has not imposed restrictions to stop the spread of the new coronavirus, say infections have been detected at an institution for children with psychological problems.

A statement from the government of the Mogilev region said tests performed on all the institution’s staff and patients turned up some infection cases. It was not revealed how many cases.

Belarus’president has dismissed concerns about the coronavirus despite a sharp rise in infections. The country reported its largest one-day number Sunday of new cases at 873.

More than 10,000 infections have been recorded in the country of 9.5 million.

BERLIN — Police in the German city of Cologne say they have shut down a makeshift brothel operating in violation of coronavirus restrictions.

The city’s police force said officers went to an apartment building as part of an investigation into an attempted killing. They didn’t find the man they were seeking but did discover a half-dozen prostitutes of various nationalities in rooms in the building, one of whom had just welcomed a client.

A police statement Sunday said that the house’s owner had recruited the women online. He faces a criminal investigation following Friday’s discovery.

Prostitution is legal in Germany but brothels and other such facilities were shut down last month as part of measures to slow the spread of the coronavirus.

PARIS — The itch to dance and break out of coronavirus lockdown to bust a few moves in the fresh air has proved too strong for some to resist in Paris after weeks of staying home.

Video of Parisians dancing in the street this weekend, some wearing face masks, triggered buzz and criticism on social networks and an apology Sunday from the out-of-work theater technician who blasted the music from his balcony.

Nathan Sebbagh has been thanking medics and trying to lift spirits with half-hour hip-shaking musical selections on Saturday evenings. But his goodwill gesture this weekend became a victim of its own success.

Police knocked at his door and gave him a lecture after a small but frisky crowd gathered and danced under his balcony.