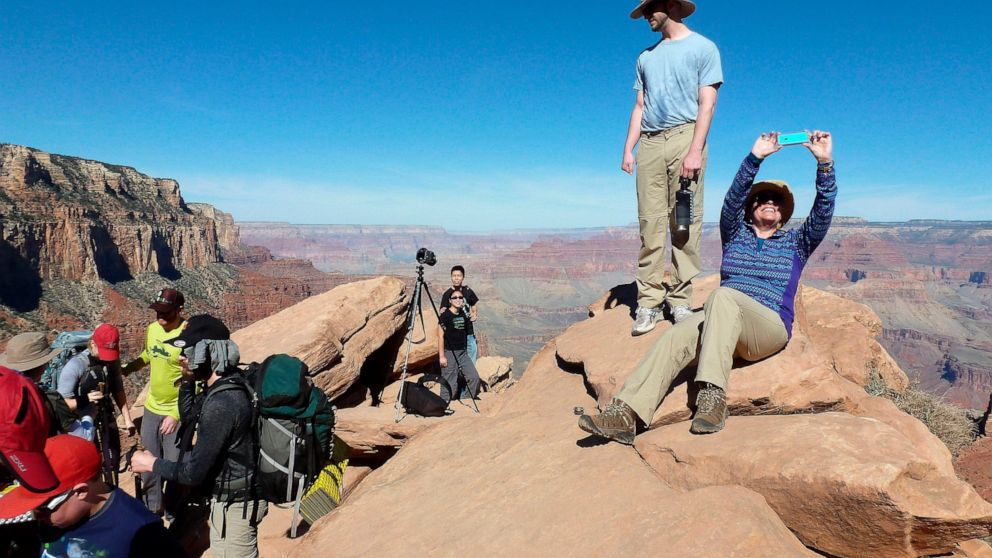 PHOENIX — Musetta Vander has been to several of the most iconic national parks and landscapes in the U.S., capturing herself doing a yoga pose among the Joshua trees, driving on a tree-lined highway framed by Yosemite’s towering rock formations and sitting at the edge of a cliff overlooking a horseshoe-shaped bend in the Colorado River.

“Sometimes it’s so beautiful you want to share it with the world immediately,” said Vander of West Hollywood, California. “However, I feel that you miss out on the magical experience nature provides you when you don’t let go of social media or whatever else is consuming your mind.”

Vander’s travels illustrate a long-running debate over how connected national park visitors can or should be to the internet. Parks are grappling with the best way to expand service while preserving the serenity of the outdoors.

While those plans are a lower priority because the coronavirus has closed parks, National Park Service officials are intent on resolving the connectivity issue as states gradually start lifting restrictions.

“We are doing our best to maintain as many project timelines as possible,” park service spokeswoman Vanessa Lacayo said.

The coronavirus shows the need for better internet service as more people work from home, said Christine Gale Reynolds, who lives in Yosemite Village within the park. The equipment also can’t keep up with the summertime spike in visitors.

“When my community expands to include a lot of tourists and travelers, it’s very competitive to get on the Wi-Fi, and people start getting bumped off,” she said.

Kam Redlawsk points to service as a safety measure. She and her husband got lost visiting the federally managed Trona Pinnacles, massive rock structures in the central California desert, and couldn’t get cell service. They got nervous as night fell but found a path out. She thinks about that in national parks and now amid the pandemic.

“Access should be an equal right, especially in times of crises,” she said.

That’s playing out at the Grand Canyon, where park officials are mapping where to put new communications towers. Some of the existing ones are prominent in heavily touristed areas. Others can be spotted among the trees.

A proposal calls for adding up to five towers, none of them below the rim. The other option would be considering new infrastructure case by case. Officials will decide later this year.

In a wide-ranging 2016 survey, 83% of visitors said using electronic devices was at least slightly important to their stay at the Grand Canyon, which gets more than 6 million visitors a year.

The park knows people rely on cellphones and other devices for directions, reservations and more, said Elly Boerke, an environmental protection specialist at the Grand Canyon, and there’s “not an expectation that shouldn’t occur.”

But a group of Grand Canyon river guides advocated for keeping the backcountry free of cellphone service.

“Cellular companies only care about increasing profits and expanding coverage,” the group’s board wrote.

AT&T said it supports the Grand Canyon’s plan but questioned whether multiple carriers should rely on the same equipment.

But the need to get a perfect shot for social media requires reminders for “safety over selfie,” as people sometimes venture close to cliff edges, Lacayo said by email.

Parks say outdated and inadequate service leaves people searching for signals. Most of their improvement plans focus on developed areas and try to camouflage towers as trees or within the landscape.

Grand Teton National Park in Wyoming has approved a plan for more than 60 miles (97 kilometers) of underground fiber-optic line, with construction expected to begin this summer. The park known for its jagged mountain peaks also is considering a proposal for a cell tower.

“The interior of Yellowstone has been starved for bandwidth,” said Bret De Young, branch chief of technology, adding that the popularity of smartphones meant equipment installed in 2008 was overburdened within a year.

At Bryce Canyon National Park in Utah, officials are considering a request from Verizon to erect a 60-foot (18-meter) cell tower on a plateau near a canyon filled with spire-shaped red rock formations.

Visitor numbers have more than doubled in the past decade, and the park relies on social media to let people know about conditions like flash floods in slot canyons. But tourists can read those updates only if they’re at limited locations with Wi-Fi and cellular signals, many of them outside Bryce Canyon’s boundaries.