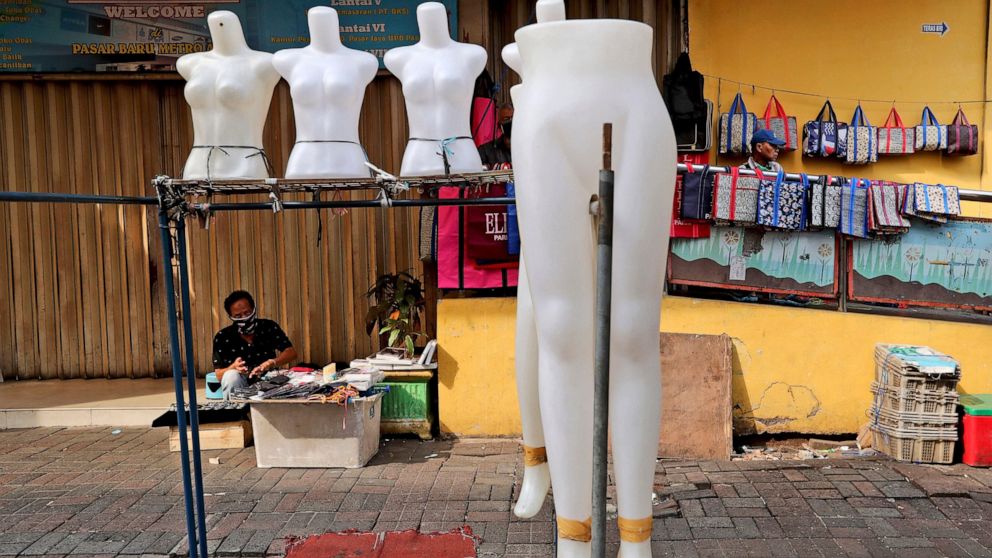 JAKARTA, Indonesia — May Day usually brings both protest rallies and celebrations rallies marking international Labor Day. This year, many in Asia are shut up at home, riding out the coronavirus pandemic.

Among the ten of millions of people left idle or thrown out of work by the crisis, garment workers have been among the hardest hit as orders dry up and shutdowns leave factories shuttered, giving workers plenty to protest at a time when lockdowns are keeping them at home.

Wiryono, a father of two was laid off from his main job as a sample producer at a garment factory in North Jakarta in late April. His side gig, delivering coffee by motorcycle to construction workers, dried up when work halted as part of Indonesia’s shutdown to fight the pandemic.

So, for now Wiryono has rented a small space and runs a clothing repair shop.

“I don’t earn as much as I got from the clothing factory. But I have to feed my wife and kids every day,” he said.

Millions of jobs have vanished in countries like Bangladesh, Indonesia, Cambodia and Myanmar that rely heavily on garment manufacturing as fashion brands cancelled or suspended billions of dollars’ worth of orders.

More than 2 million garment factory workers in Indonesia have lost their jobs, and factories are operating at about 20% of capacity, according to the Indonesian Textile Association.

In Cambodia, which also relies heavily on apparel, footwear and textile exports, about 130 factories have laid off some 100,000 people, said Heng Sour, spokesman for the labor ministry.

The country’s 1,000 clothing and shoe factories normally employ nearly 800,000 people and shipped nearly $10 billion worth of products to the United States and Europe last year.

“COVID-19 is like a faceless murderer or terrorist, killing several hundred thousand people and infecting millions around the globe,” Heng Sour said. Like many other governments, Cambodia has asked workers to forego the usual rallies and protests and celebrate Labor Day at home.

Likewise, in Muslim-majority Indonesia, where the month-long daytime fasting of Ramadan is underway and the government has likewise asked people not to gather in large groups as a precaution against the virus.

The shutdown has cut into sales of new clothing for Eid al-Fitr, the festival that follows Ramadan, after the Tanah Abang Market, Southeast Asia’s biggest textile bazaar, closed in mid-March, said Rizal Tanzil Rakhman, executive secretary of the textile association.

The industry wants government help in covering fixed expenses and loans, he said.

“It’s not just those who make the clothes, but the production chain, such as the makers of fibers and yarns, thread producers and dye and printing operators,” Rakhman said. The situation is bad enough now but it will get worse without government help.”

The pressures from the pandemic come at a time when countries like Cambodia and Myanmar already are threatened with the withdrawal of trade privileges under the “Everything But Arms” scheme that gives them preferential access to the EU market for products other than weapons.

The EU plans to withdraw those advantages for Cambodia, which are worth about one-fifth of the billion euros ($1.1 billion) of its exports to the bloc each year, because of concerns about its poor record in human and labor rights.

In Myanmar, which has sought to build up its garments exports to industrialize an impoverished economy based mainly on farming, mining and logging, more than 60,000 factory workers have lost their jobs.

“With the factories being shut down, it has meant they have lost their only means of livelihood, that’s their lifeline really, for themselves and the families that they support,” said Araddhya Mehtta, the country director of the NGO ActionAid Myanmar.

The crisis has left many women more vulnerable to sexual and domestic violence, said Mehtta, whose group says it provides health guidance, food relief, hand sanitizer and cash support to some 150,000 garment workers.

The fierce competition in an industry where slim profit margins leave factories scant leverage with the global, wealthy customers, the pressure to go back to work is building.

Nearly a month after Bangladesh ordered its garment factories shuttered to prevent the spread of the coronavirus, more than 800 factories have reopened or plan to do so soon, despite risks the disease might spread. Labor activists say the number of factories that have gone back to work is higher.

Bangladesh has the world’s second largest garment industry after China and normally earns about $35 billion a year from exports, mainly to the United States and Europe. The pandemic has cost manufacturers more than $3 billion in cancelled or suspended orders, said Rubana Huq, president of the Bangladesh Garment Manufacturers and Exporters Association, or BGMEA.

Most of Bangladesh’s 4 million garment workers, mostly women from rural areas, were sent home in late March. Production is starting back up before the virus outbreak has been fully controlled: the number of newly confirmed infections has continued to rise this week.

“The global brands, especially the European ones, want their racks full of cheap Bangladeshi products. They are directly and indirectly telling the owners that they will move to our competitors like Vietnam, Cambodia or China, said Kalpona Akter, executive director of the Bangladesh Center for Workers Solidarity.

“Some owners are perfectly maintaining good safety measures in place, but many others are ignoring them. This is dangerous,” she said.