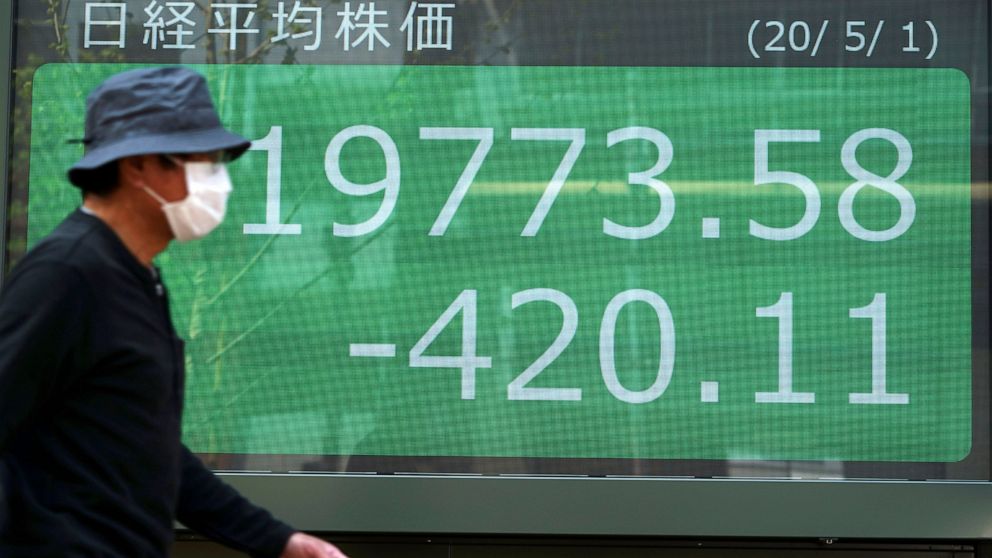 Shares dropped in Europe and Asia on Friday after the latest data drove home the extent of economic carnage from the coronavirus pandemic.

Australia’s S&P/ASX 200 plunged 5% to 5,245.90 with heavy losses in miners and banks. A measure of Australian manufacturing showed activity contracting at its worst pace since 2009. That, coupled with news overnight that millions more Americans applied for unemployment benefits in April, darkened the mood after a relatively strong April.

Signs of growing tensions with China, Australia’s biggest trading partner, added to jitters. The two governments are at odds over calls for an independent inquiry into the origins of the coronavirus, with China warning of possible repercussions for imports from the resource-rich country.

Japan’s Nikkei 225 index slipped 2.8% to 19,619.35 as the economy minister, who is heading the government’s coronavirus efforts, said social distancing measures needed to be kept in place to help prevent a resurgence of infections.

“If we relax the measures with insufficient decrease, infections will immediately bounce back and our effort so far will entirely go to waste,” said the minister, Yasutoshi Nishimura. “The experts recommended that the current measures should be kept in place.”

Overnight, the S&P 500 fell 0.9% on the dismal jobless data and news that the economy of countries using the euro contracted 3.8% in the last quarter, its biggest slump since the EU began keeping reporting such data in 1995.

The U.S. jobless figures brought the total of people filing for unemployment to 30 million in just six weeks. Other data showed consumer spending plunged a record 7.5% in March from the month before, a dire blow for an economy where such spending makes up 70% of the total.

“Maybe it was the whole month-end malaise, or maybe they just need to hear something new and impactful, and that we’re ultimately seeing buying fatigue,” Chris Weston of Pepperstone said in a commentary.

Promises from the Federal Reserve and other central banks to do whatever it takes to get economies through the coronavirus crisis have supported buying by investors betting that a recovery will come soon. Professional investors say that optimism may be premature.

The yield on the 10-year Treasury edged down to 0.60% from 0.63% late Thursday. It started the year close to 1.90%. Treasury yields tend to fall when investors are downgrading their expectations for the economy and inflation.

Budget airline Ryanair said Friday it plans to cut up to 3,000 jobs and close bases in Europe as part of a restructuring program that includes plans for unpaid leave and pay cuts of as much as 20%.

The budget airline says will operate less than 1% of its flights from April to June and that passenger numbers will not return to 2019 levels “until summer 2022 at the earliest.’’

The airline group also says it is “active negotiations” with Boeing to cut the number of planned aircraft deliveries over the next 24 months.

With travel nearly at a standstill, oil prices have remained volatile.

U.S. benchmark crude yoyo’d between gains and losses, adding 16 cents to $19.00 per barrel in electronic trading on the New York Mercantile Exchange. It jumped $3.78 on Thursday to $18.84 per barrel.

Oil has recovered from the below zero level it hit on worries over collapsing demand and strained storage capacity. But it’s still way below the roughly $60 level where it started the year.

Brent crude, the international standard, gave up 20 cents to $26.28 per barrel.