By Chris Jewers For Mailonline

A video from inside an Indian hospital showing coronavirus patients in beds next to dead bodies has gone viral.

According to the posts on the social media sites, the hospital shown in the video is Mumbai’s Lokmanya Tilak Hospital, in the Sion district which is in the heart of the city which has over 18 million residents.

Cases of the coronavirus in India rose past 50,000 on Thursday, with no sign of the pace of new infections slowing despite the extension of the country-wide lockdown to May 17.

Today, India saw a rise in 3,561 new cases, putting the total at 52,952. The death toll also rose by 89, taking its total fatalities from the disease to 1,783, a number that is relatively low compared to the likes of the U.S. and Western European countries despite India’s population of 1.3 billion. 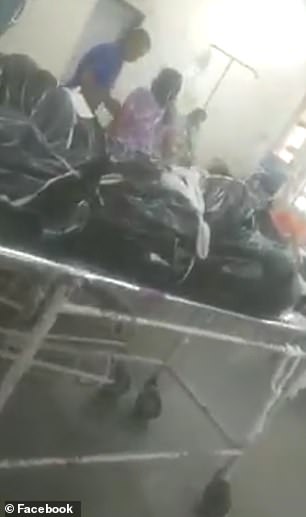 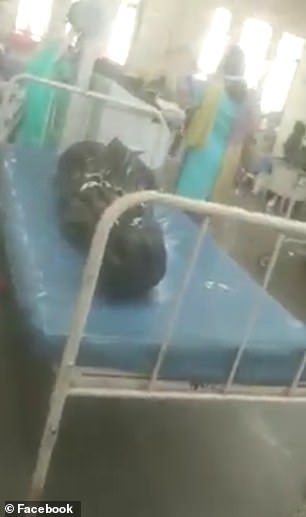 Bodies wrapped in black plastic can be seen close to Covid-19 patients in a video that has gone viral on social media in Mumbai, India. The video shows bodies of people who have died of Covid-19 on hospital beds, with live patients being treated in the same room 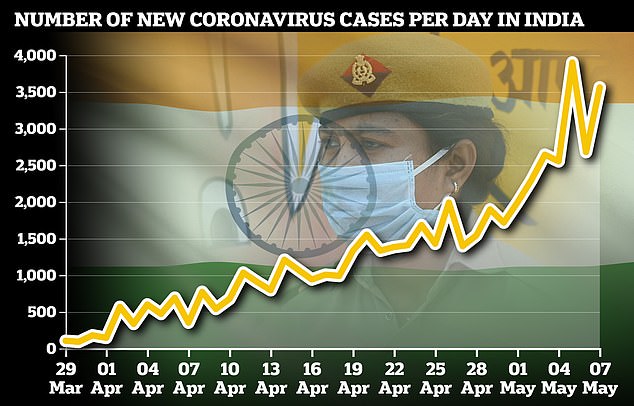 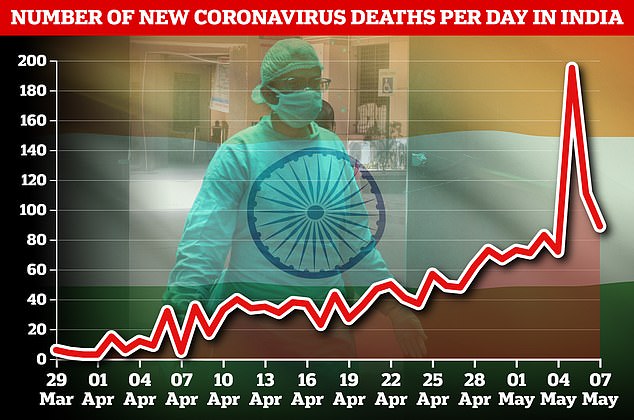 The video in the hospital was filmed by a man who does not show his face, and from the way the video it is filmed, it appears he is attempting to be discreet.

Starting from outside a hospital ward, he films as he walks into a room that reportedly has around ten Covid-19 patients being treated within.

After showing a patient, the man pans his camera around, showing bodies wrapped in black polythene bags on tables or hospital beds, close to those being used to treat live coronavirus patients.

As the video continues, more patients undergoing treatment can be seen, as can be more bodies wrapped in black plastic.

Nitesh Rane, a member of India’s Legislative Assembly (MLA), shared the video on Twitter with the message: ‘In Sion hospital, patients are sleeping next to dead bodies! This is the extreme. What kind of administration is this! Very, very shameful.’ 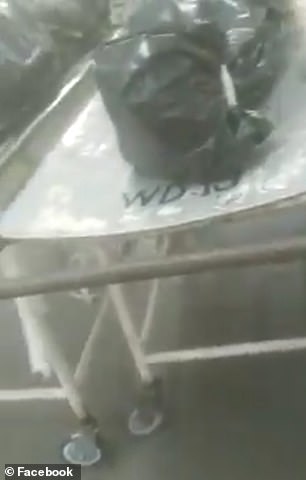 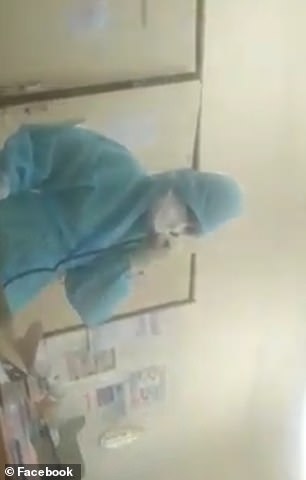 Bodies next to coronavirus patients in a hospital in Mumbai, left and right. The video in the hospital was filmed by a man who does not show his face, and from the way the video it is filmed, it appears he is attempting to be discreet

Rane’s tweet alone has been shared over 2,500 times and garnered over 3,500 likes, and since the video was posted, outrage has grown both on social media and among politicians and the public.

The MLA also noted that the hospital’s patients mainly come from Dharavi, the largest slum in the country, which is currently experiencing high numbers of Covid-19 cases. Dharavi alone reported 50 new coronavirus on Thursday.

The Brihanmummbai Municipal Corporation (BMC) said on Thursday that it has set up a committee in order to verify the video after figures in India’s ruling Bharatiya Janata Party (BJP) hit out at the city’s administration. 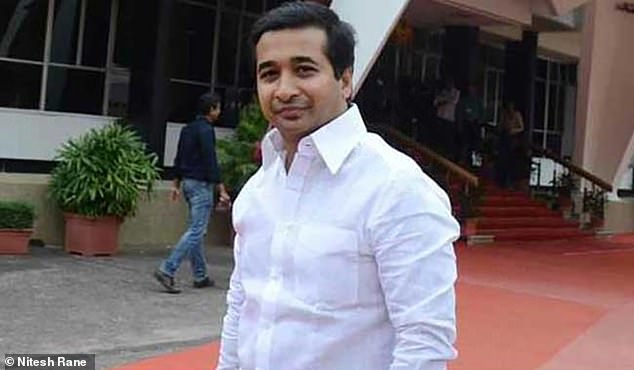 MLA Nitesh Rane appeared to be the first public figure to draw attention to the video showing the hospital where Covid-19 patients were being treated, adjacent to body bags 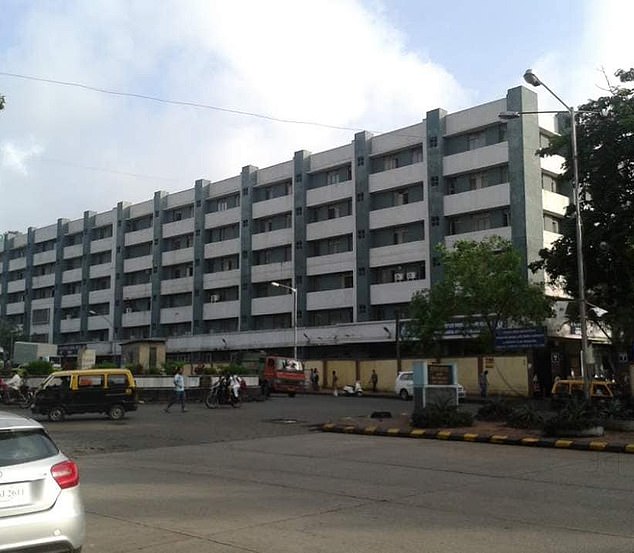 The hospital shown in the video is Mumbai’s Lokmanya Tilak Hospital (pictured) in the Sion district which is in the heart of the city which has over 18 million residents.

The dean of the hospital, Dr. Pramod Ingale, appeared to confirm the legitimacy of the video when he said that the hospital is facing a challenge when it comes to handing over bodies to relatives, finding that relatives are reluctant to take them, adding that they have since removed the bodies and are investigating.

‘The video seems to be from Sion Hospital. The challenge with us is that relatives are not ready to take the bodies. Usually relatives are behind us to handover the body. In COVID-19 cases, they are not coming forward to collect the body,’ Doctor Ingale said in a statement.

‘By the time we disinfect and wrap the body of a COVID-19 patient the relatives disappear. We can’t dispose bodies on our own. We have to inform the local police station and medical health officer about the death.’

He also warned that the mortuary would be full in no time if all the bodies are moved there, saying that they have a capacity of 60 bodies, of which 15 spaces are set aside for those who have died from Covid-19.

He said that this also impacts the hospital’s ability to store non-Covid-19 bodies, and that they are trying to give them to relatives as soon as possible to keep the numbers down. ‘We will improve on it in future,’ he added. 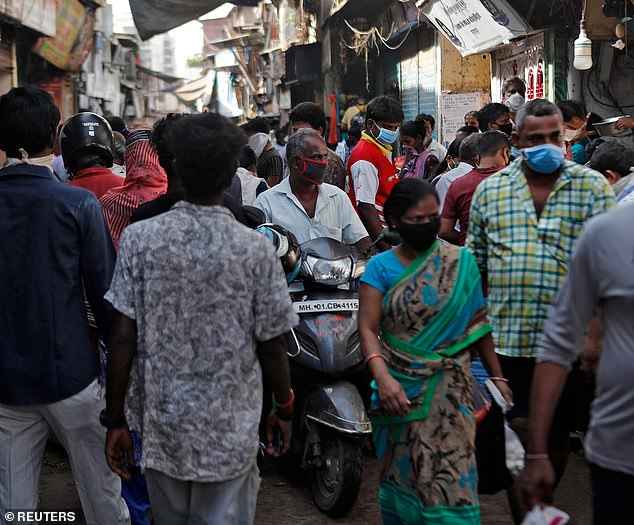 Reportedly, the hospital’s patients mainly come from Dharavi, the largest slum in the country (pictured in April) which is currently experiencing high numbers of Covid-19 cases

Devendra Fadnavis, the former chief minister of the Maharashtra state where Mumbai is located and the Leader of the Opposition in the state assembly also hit out at the government over the video in a Tweet.

‘Sion Hospital incident is extremely serious and shocking. Patients which are being treated are lying beside dead bodies. This is utterly inhuman,’ he wrote.

‘It is a very serious matter that patients have to be treated on the side of the corpse. The question is whether Mumbaikars have no guardian. Is there no one to care for Mumbai? The government must immediately look into this & ensure that it doesn’t happen ever again!’ he added.

Congress leader Milind Deora questioned the BMC for failing to follow World Health Organisation (WHO) protocols for disposing of bodies, tweeting: ‘Outraged to see corpses laid beside the sick at Sion Hospital. Why isn’t [BMC] following WHO-prescribed protocols when disposing of COVID-19 corpses?’

Deora was sympathetic towards hospital workers, saying the emphasis should be on the city’s government to solve the issue: ‘Public hospital staff are doing their best with limited resources at hand. Mumbai’s administration needs to step up now,’ he wrote.

The BMC has already issued an order that all bodies of people who have died of Covid-19, or even those suspected to have died from the disease, should be handed to relatives within 30 minutes of death. 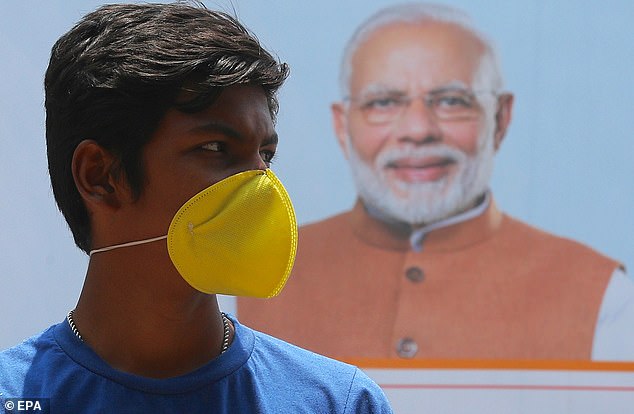 A young Indian man with a mask stands in front of a picture of Prime Minister Narendra Modi, who ordered a 3-week country-wide lockdown on March 24, which has since been extended to May 17 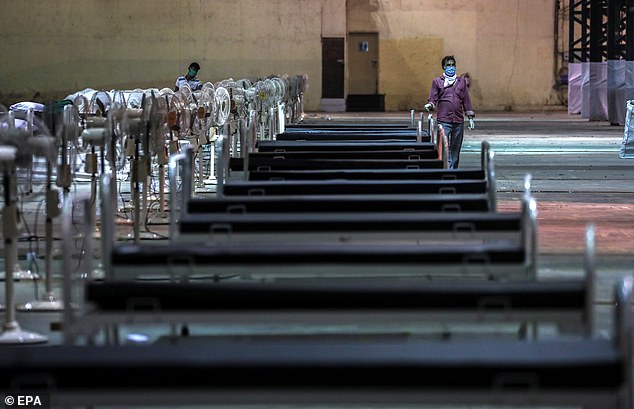 Workers prepare beds at the Nesco Cetre Hall, one of the biggest exhibition centres in Mumbai, which is being converted into a quarantine centre for Covid-19 patients

Figures show that as of Thursday, Maharashtra state has seen 14,531 cases of the coronavirus and 583 deaths resulting from the disease, with Mumbai alone now accounting for 10,714 cases and 412 deaths in the state.

The state is by far the worst hit in the country of 1.3 billion people, which has seen a total of 52,952 cases and 1,783 deaths. 15,267 coronavirus patients are reported to have recovered in India.

Today, India saw a rise in 3,561 new cases, putting the total at 52,952. The death toll also rose by 89, taking its total fatalities from the disease to 1,783, a number that is still low compared to the likes of the U.S. and Western European countries despite India’s population of 1.3 billion.

Officials said the low death toll was due to the government’s action to impose the stay at home order early in the country’s crisis, but noted that a spike in infections was being seen in more densely populated areas, specifically citing Mumbai and Maharashtra.

‘The (government) is ready to help in every way possible – be it manpower increase, capacity building, technical assistance, etc, or any kind of hand-holding that is required to manage the situation,’ said Health Minister Harsh Vardhan.

India’s infection count has risen by an average of 6.1 per cent during the week before May 5, behind Russia and Brazil but higher than the UK, US or Italy.

Health experts say the increase shows that India remains at risk of a devastating outbreak despite a severe month-long lockdown.

In March, the country’s Prime Minister Narendra Modi announced an unprecedented lockdown starting on the 24 March, in which all the country’s 1.3 billion people were ordered to stay at home.

On May 1, two days before the end of the 21-day lockdown period, it was extended further until May 17. The country has divided the country into green, orange and red zones, each having relaxations applied in accordance with the severity of the virus in the zone.

Now cases are doubling every 12 days, up from 3.4 days when the lockdown began, said Lav Agarwal, a joint secretary in the health ministry.

‘Lockdown and containment are yielding results, the challenge is now to improve on the doubling rate,’ he added.

The lockdown has been eased to allow the sale of alcohol, but the measure prompted large gatherings at liquor stores in Delhi and elsewhere.