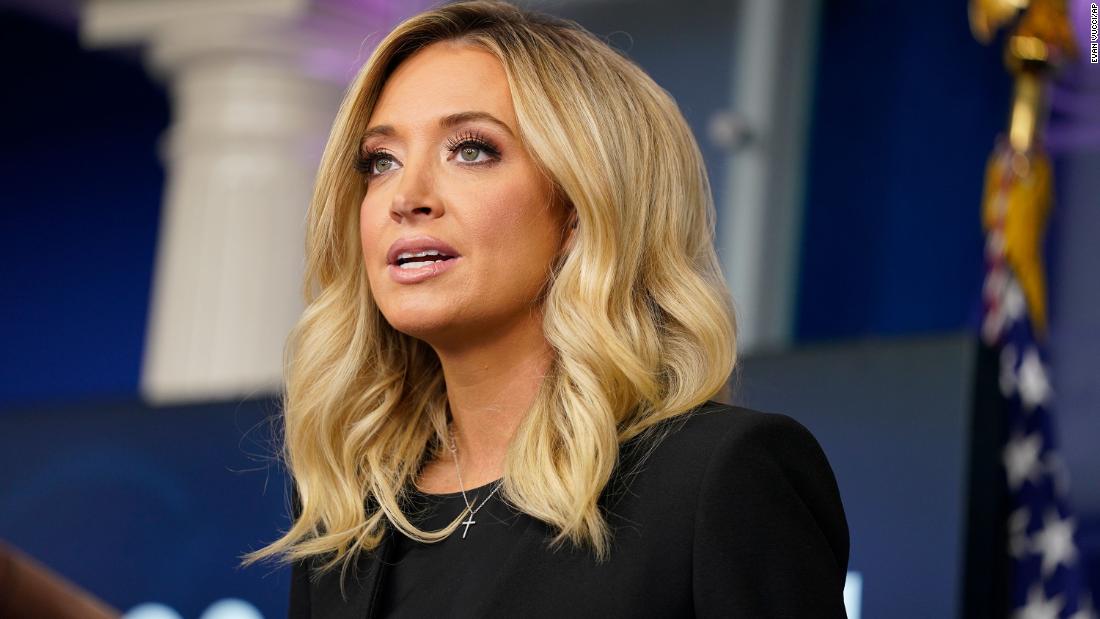 Before becoming a prominent pro-Trump commentator during his first campaign, McEnany said it was “unfortunate” and “inauthentic” to call him a Republican. McEnany made the comments in a series of panels on CNN and Fox Business.

McEnany, at the time a Republican writer and Harvard Law student would go on to defend Trump as a CNN contributor during the 2016 presidential election year. After Trump was elected, she served as a spokeswoman for the Republican National Committee and the Trump re-election campaign, before being named White House press secretary in early April.

In 2015, McEnany was particularly critical of statements Trump made while announcing his campaign, in which he said Mexico was sending immigrants to the US who were “rapists” and bringing drugs and crime to the country. Trump added that “some, I assume, are good people.”

“To me, a racist statement is a racist statement. I don’t like what Donald Trump said,” she said in an exchange on CNN in late June 2015, in which she compared his remarks to comments about Jewish people made by the Rev. Al Sharpton in the 1990s.

McEnany added that Trump’s comments were “derogatory” and as “equally hateful” as Sharpton’s.

“Donald Trump has shown himself to be a showman, I don’t think he is a serious candidate,” she added. “I think it is a sideshow. It’s not within the mainstream of the candidates.”

During an appearance as a commentator on Fox Business’ “Kennedy” on June 23, 2015, McEnany criticized Trump’s rhetoric saying he didn’t deserve to be polling second in New Hampshire.

“Donald Trump is number two and doesn’t deserve to be there,” McEnany said.

“I appreciate his boldness and I think some of his rhetoric got the base excited, but it is not welcome rhetoric,” she said. “Some of the things we heard in his speech when he said, when Mexico sends people across the border, they’re sending criminals and rapists and maybe some good people. Look, the GOP doesn’t need to be turning away voters and isolating them. We need to be bringing them into the tent. Donald Trump is the last person who’s going to do that.”

Speaking on CNN on June 29, 2015, McEnany added Trump was hitting at a “real problem” with a “porous border,” but also said his comments were wrong.

“I want to make clear, I don’t support what Donald Trump said,” she added. “I think he said something very unartful, very inappropriate.”

“I think the mainstream Republican does not want to send the illegal immigrant back to Mexico. I think that they’re here to stay, that’s not the American way. We’re not going to ship people across the border. There has to be some path to citizenship. So, in that sense, I don’t think Donald Trump is consistent with mainstream Republicans. There’s going to be a path.”

A day later on CNN, McEnany called Trump “a Republican in name only” who needed to apologize for his comments.

“That’s the problem with Donald Trump is he can’t apologize for his own statement. And not apologizing, he’s losing credibility on what is a credible issue. The Obama administration just last year released 600 illegal immigrants who had criminal convictions,” she said.

“I don’t want to claim this guy,” she added. “Donald Trump, if we’re going to be honest, is a progressive. He supports eminent domain. He supported tax increases before. He’s donated 300,000 to Democratic candidates. So, the fact that the Republican Party is now having to claim him, is both unfortunate, and to me, inauthentic. Because this is not a true Republican candidate. And the fact that he’s being portrayed as such in media is troublesome and not accurate.”

Though an early critic, McEnany began defending Trump by July and August of 2015, especially in regard to his comments on Mexican immigrants.

By July 2015 and continuing through the fall, McEnany’s rhetoric on Trump began to shift, as Trump continued to lead in primary polling.

In a July 8, 2015, appearance on Fox Business, McEnany defended Trump’s comments about Mexicans by comparing him to comedian Amy Schumer after a Washington Post op-ed noted Schumer’s jokes about Latino men being rapists were similar to Trump’s rhetoric. Schumer claimed she was “playing an irreverent idiot.”

“I don’t think that they’re too far off comparing what Amy Schumer said and Donald Trump. I think that that’s a good comparison,” McEnany said. “It seems like comedy is this veil where you’re allowed to say anything you like whereas what she said is – really, if you think about it – more offensive than what Donald Trump said. I understand it was in the veil of comedy but she essentially implied that Hispanics rape — far more offensive than what Donald Trump said.”

After a panelist noted that standards should be considered higher for people seeking political office than comedians, McEnany sought to clarify Trump’s comments, noting that Trump said Mexico “is sending” their rapists, and is not full of them.

Speaking on HLN in October 2015, McEnany outright defended Trump’s comments on Mexicans, saying they were taken out of context.

“Donald Trump is benefiting from all of this, because here is the thing, because every time someone tries to falsely put words in his mouth, they say that he said all Mexican immigrants are criminals, but he did not say that,” McEnany said.

“He said, when Mexico sends people, that is different,” she added. “Mariel boat lift, Cubans and criminals. That is not an absurd thought, but people tried to paint him as a racist and sexist. But he benefits from that because people are tired of this politically correct culture, where you have to say everything perfectly correct, or else you are going to offend an entire segment of society.”