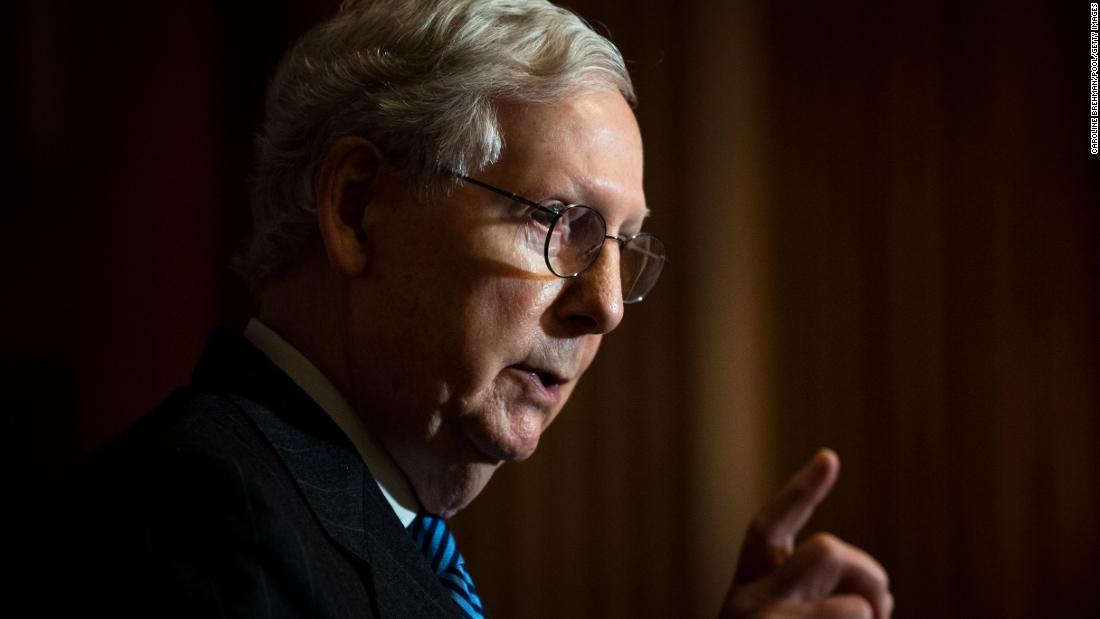 And it’s in the Senate where Republicans will be faced with a very clear choice: Will they vote to convict Trump or, as they did in 2019, acquit him?

What we know is that Senate Majority Leader Mitch McConnell believes that impeachment is actually a good thing for his party because it opens the possibility that the GOP can make a very public break from the outgoing President.

McConnell hinted at his openness in a note to his Republican colleagues Tuesday afternoon, saying, “While the press has been full of speculation, I have not made a final decision on how I will vote and I intend to listen to the legal arguments when they are presented to the Senate.” (Contrast that to how quickly McConnell came out in opposition to the 2019 impeachment of Trump over his conduct in regard to his action toward Ukraine).

But McConnell has yet to commit to voting to convict Trump. He should. Here’s why.

1. Trump is a declining stock. Yes, there remains a decent-sized chunk of the Republican base that remains loyal to Trump. But as the President has made clear over these past few weeks — not to mention the last four years of his presidency — he is absolutely and totally unpredictable and uncontrollable. He will say and do things (and has already said and done things) that neither McConnell nor any Republican with an eye on the medium- and long-term future of the party can possibly condone or be forced to answer for.

If McConnell votes to convict Trump for his role in inciting a riot at the US Capitol, it’s very likely that he would bring enough of his Republican colleagues along with him to ensure the 67 votes necessary for Trump’s removal. (“If Mitch is a yes, he’s done,” one Senate GOP source who asked not to be named told CNN on Tuesday night.) The removal of Trump from office wouldn’t mean that all of the capitulation that McConnell and other Republicans did to Trump over the past four years would be forgotten, of course. But it would sure make it easier to begin putting Trump in the rear-view mirror — and make sure that every single Republican elected official didn’t have to respond to every norm-breaching thing the President does in his last week in office and after he leaves the White House.
2. Trump is costing Republicans money. The slew of announcements from corporate America that they will cease making donations to Republican House members and senators who voted to object to the Electoral College results should be very, very worrisome for McConnell and the rest of the GOP leaders charged with trying to win back the House and Senate majorities over the next few elections. (The fact that Florida Sen. Rick Scott, the chairman of the senatorial campaign arm, voted to object to the electoral results in Pennsylvania is a major problem for Republicans.)

McConnell — not to mention House Minority Leader Kevin McCarthy (California) — need a way to go to these corporations with something to get them back on board. What better way than to say that the Republican-controlled Senate convicted and removed Trump from office — a sort of mea culpa for the Electoral College objection votes cast earlier this month?

3. Trump’s term is done anyway. Unlike removing Trump a year ago, impeaching and removing him now would have very little practical effect on the body politic or the inner workings of official Washington. A week from now, Joe Biden is going to be sworn in as the 46th president no matter what the Senate does with the House’s articles of impeachment. And as I’ve noted before, Trump himself has effectively stopped doing the job at this point. He is totally disengaged in the ongoing fight against the coronavirus, choosing instead to nurse his grudges against large tech companies, the media and Republicans who he believes have betrayed him. The guy has zero interest in keeping the job, and he is almost out of the job anyway.

Yes, as you can tell from the points above, McConnell (and the Republican-led Senate) voting at some point soon to remove Trump from office would be a largely symbolic gesture. But in politics as in life, symbolism matters! Words matter!

As then-candidate for president Barack Obama said in 2008: “It’s true that speeches don’t solve all problems. But what is also true is if we cannot inspire the country to believe again, then it doesn’t matter how many policies and plans we have.”

CORRECTION: This story has been updated to correctly state that Biden will be sworn in as the 46th president.