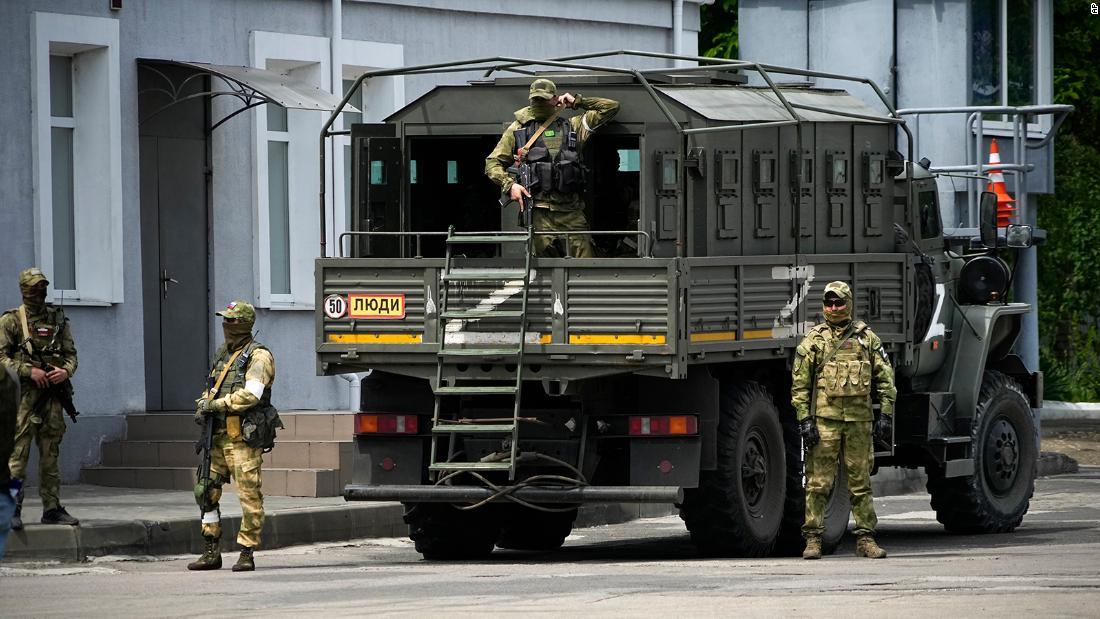 Zelensky said in April that “justice will be restored. Everyone who became a Gauleiter can register to live somewhere in Rostov-on-Don,” in Russia.

From Mariupol to Enerhodar, the Russians have been able to find Ukrainians ready to become local officials, though in many cases their competence has been questionable.

Most of those accused of collaboration are still beyond the reach of Ukrainian prosecutors. But about 40 former officials and others have already faced trial under stringent laws enacted soon after the invasion. Some have been found guilty of providing military intelligence to the Russians.

Prosecutions continue — but not all cases are crystal clear. Local officials in areas overrun by Russian forces have frequently faced an unenviable choice: try to protect and represent the people who elected them — or leave quickly. The southern region of Kherson has provided many examples of this dilemma.

Russian troops guard an entrance of the Kakhovka power plant on the Dnieper River in southern Ukraine on May 20, 2022.

But Ilya Karamalikov, a city council member in Kherson, stayed. Now, he faces charges of treason.

The six-page indictment, which CNN has obtained, alleges that Karamalikov “performs actions aimed at harming the sovereignty, territorial integrity and inviolability” of Ukraine, “by switching to the side of the aggressor country of the Russian Federation during martial law, and assisting its representatives in subversive activities against Ukraine.”

His lawyer, Mikhail Velichko, strenuously denies the charges, and says Karamalikov is to be commended for staying at his post and trying to keep order in the city in the chaotic days after the invasion.

“All security forces and the regional administration were evacuated in advance. Kherson was abandoned,” Velichko said. “This not only led to the absence of Ukrainian authorities in the regional center, but also endangered the safety of the residents of Kherson, who were left to fend for themselves.

“Civilians cannot resist brute armed force,” Velichko told CNN. “Yes, many collaborate. And many simply refuse and wait for Kherson to be de-occupied. Many teachers, for example, refused to work. The mayor refused to work.”

Nearly two months later, Karamalikov was arrested after crossing into Ukrainian-held territory, as he was bringing his family out of Kherson. He was held at the security services’ building in Kryvyi Rih, and Velichko claims he suffered physical abuse and torture. CNN has requested a response to the claim from Ukrainian authorities.

Karamalikov is still detained and has been accused of giving the occupation authorities confidential information, such as the personal data of Kherson law enforcement officers, politicians and activists.

Velichko says this is ridiculous. “The military registration and enlistment office had full lists: with addresses, with surnames, with telephones and positions of people. Lists of all employees of the territorial defense of the Kherson region. There are lists of military personnel, as well as civilians. All this was open,” he said.

Prosecutors also allege Karamalikov assisted in the evacuation of wounded Russian military personnel and helped them find food and rehabilitation.

Russian army soldiers stand next to their trucks during a rally against Russian occupation in Svobody (Freedom) Square in Kherson on March 7, 2022.

On February 25, the day after Russian troops rolled across the border, Karamalikov posted an appeal on Facebook for volunteers for a Municipal Guard to keep order and prevent looting, as well as organize humanitarian aid.

One resident, who asked not to be identified, told CNN: “They defended the city from marauders, every day they caught someone.”

Indeed, the mayor of Kherson Igor Kolykhaiev, who also remained behind, said on March 20: “There is no police, no prosecutor’s office, no judicial system left in the city….There are looters in the city, there are attempts to fight them. The Municipal Guard protects Kherson around the clock against looting.”

Karamalikov himself posted on Facebook: “The ‘Municipal Guard’ of Kherson — the only power authority in the city today. Tasks: patrolling the streets of the city, fighting looters, illegal trade, street and domestic violence.”

Velichko says his client inevitably had to deal with the new authorities. One of Karamalikov’s calls, intercepted by the Ukrainian security services, illustrated his awkward position. Volunteers had detained a Russian deserter, according to his lawyer. Holding him while Kherson was under occupation could have brought harsh retribution, so Karamalikov decided to hand him back and established contact with Russian forces.

Rejecting claims that he was on good terms with the Russians, one associate said that premises in Kherson city owned by Karamalikov had been searched by Russian forces on March 24. Two weeks later, pro-Russian Telegram channels claimed the “Municipal Guard” in Kherson was engaged in looting and accused both Kolykhaiev and Karamalikov of covering up racketeering.

Karamalikov decided to get his family out of Kherson. When he did — on April 14 — he was detained by Ukrainian police at a checkpoint.

According to documents reviewed by CNN, the case against Karamalikov has relied largely on the account of a senior officer in the security services who had left Kherson before the Russians arrived and who was subsequently dismissed by presidential decree.

Some regional officials say they have received little guidance from Kyiv about how to deal with the occupation. The mayor of Kherson city, Ihor Kolykhaev, said: “We continue to work remotely with the City Council specialists, deputies, and we are still waiting for a response from the President’s Office.” Kolykhaev is still in the region but has been ousted from his post.

Marina Peschanenko, who knows Karamalikov well, believes he has been unfairly accused. “Ilya, together with mayor Ihor Kolykhaiev, did everything to ensure that the city functioned. And this was without support from the Kyiv government,” she said.

In such desperate moments, she said, there are few good options. “Act at your own discretion, choose the solutions that you consider the best for the city. And in this extreme situation, any decisions are correct,” she said.

Petro Andrushenko, an adviser to the mayor of Mariupol, echoes that thought. “It is important to remember that working for the occupiers in the humanitarian sphere is not essentially a collaboration,” he said last month, soon after the separatist, self-declared Donetsk People’s Republic took over administration of the city. “There will be retribution, but only for real collaborators.”

But it’s unclear that the security services and prosecutors will see the situation in the same light, and that worries some who are struggling to provide essential services in Russian-occupied areas. CNN spoke with a senior official in a state-run pharmacy chain in Melitopol, also in the south, who has cooperated with the Russians. “Do we need to close all the pharmacies and run away?” this person asked CNN. “Leave residents in the occupation without medical care and without medicines? What solution does the government offer us?”

This person asked not to be identified for their own safety but added: “There is a shortage of drugs in the city, but the closure of the pharmacy network will lead to even fewer of them. There is no right decision, any choice will be bad. If you stay, you are a collaborator. If you leave, then you abandoned your citizens without medical assistance.”

Among other professions affected are teachers in occupied areas. Deputy Justice Minister Valeria Kolomiets told news agency Ukrinform that “educators are responsible for their actions – and if they start to conduct propaganda in educational institutions, saying for example that there is no occupation, then they are breaking the law.”

In Kherson, teachers have been put under great pressure to teach a new “Russian” curriculum. Some were threatened in April, according to local activists, with a blunt message: “Either give us the keys and documents, or we’ll send you ‘to rest’ in the basement.”

Others have been sent to Russian-occupied Crimea to be taught the Russian curriculum, according to Ukrainian officials.

There is also evidence in Kherson that those detained have been coerced into signing a “condemnation of the Ukrainian regime” and applying for a Russian passport, according to Kherson deputy Serhii Khlan, as well as people who talked to CNN after fleeing the region.

Such examples show that it’s often hard to distinguish between who is actively collaborating, and who is trying to navigate a risky and unpredictable existence.

Deputy Prime Minister Iryna Vereshchuk recognizes the dilemma, but the government is not ceding ground. “Do not take a Russian passport,” she said at the end of last month. “I know it may not be easy, but in the long run, Russian citizenship will create more problems for you than benefits.”

In Kryvih Rih, one of the most prominent trials for collaboration — that of Kherson city council member Karamalikov — is set to begin in the coming days.

Velichko, his attorney, is sure that his client will be vindicated, despite the raft of charges against him.

“Traitor? Or hero of Ukraine?” he asked. “For me as his lawyer and for many concerned residents of Kherson the answer is obvious: Ilya Karamalikov is a hero.”