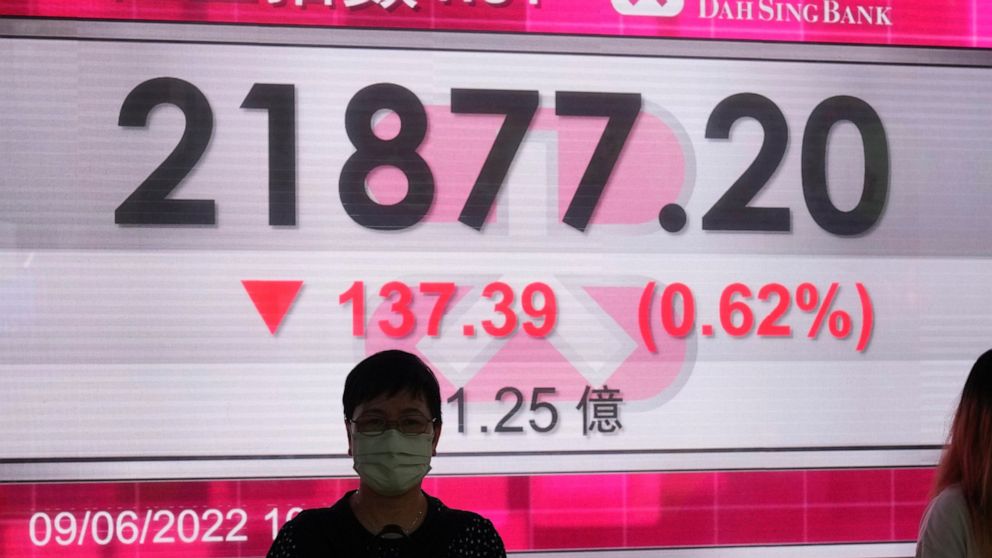 NEW YORK — Stocks are opening lower on Wall Street Thursday, putting major indexes into the red for the week. The S&P 500 was down 0.5%, the Dow was down 0.4% and the Nasdaq was off 0.8%. European markets were posting bigger declines after the European Central Bank said it would start raising interest rates next month for the first time in more than a decade. That would bring Europe’s policymakers in line with other central banks like the Federal Reserve in the U.S. in making a turn away from supporting the economy with low interest rates and toward fighting inflation with higher interest rates.

The bank will make two quarter-point increases, with the second arriving in September.

The surprise decision is in reaction to inflation that has become a “major challenge,” with the central bank believing that forces pushing costs higher had “broadened and intensified.”

Markets are bracing for more inflation data Friday when the U.S. releases its latest reading on the consumer price index. Inflation eased slightly in April after months of relentless increases, but at 8.3%, remained near a four-decade high.

The Federal Reserve is widely expected to raise its key short-term interest rate by half a percentage point at its meeting next week. That would be the second straight increase of double the usual amount by the U.S. central bank, and investors expect a third in July.

The big concern on Wall Street remains whether the Fed’s shift to aggressively raising interest rates will help temper the impact or possibly push the economy into a recession.

The Fed’s goal is to slow economic growth enough to cushion inflation’s impact. Demand for goods had been outpacing supplies and production capacity through most of the post-pandemic recovery. But investors worry the Fed could go too far too fast in raising rates, nudging the U.S. economy into a recession.

The impact from inflation has worsened since Russia’s invasion of Ukraine, which has put more pressure on energy and food prices.

Oil prices retreated slightly on Thursday, with benchmark U.S. crude sliding 21 cents to $121.90 a barrel. It gained $2.70 on Wednesday. Brent crude, the international standard for pricing oil, lost 12 cents to $123.46 a barrel.

The average cost of filling up a family car exceeded 100 pounds ($125) for the first time in Britain, as Russia’s war in Ukraine drives gasoline prices higher.

Benchmarks declined across Asia, except in Tokyo, where a weakening yen sent issues of some Japanese exporters higher.

The Japanese yen has recently slid to fresh 20-year lows against the U.S. dollar, a trend the International Monetary Fund and other analysts expect to continue for a while because of higher interest rates in the U.S. and Europe, compared to Japan, where long-term interest rates remain at near-zero.

China reported its exports surged 17% over a year earlier in May to $308.3 billion, up from April’s 3.7% growth, as coronavirus precautions were eased in Shanghai and other cities. Imports rose 4% to $229.5 billion, accelerating from the previous month’s 0.7% growth.

China’s trade has been slowed by weak export demand and curbs imposed to fight outbreaks in Shanghai and other cities. Consumer demand for imports was crushed by rules that confined millions of families to their homes, sometimes for weeks. But most factories, shops and other businesses in Shanghai, Beijing and other cities have been allowed to reopen.