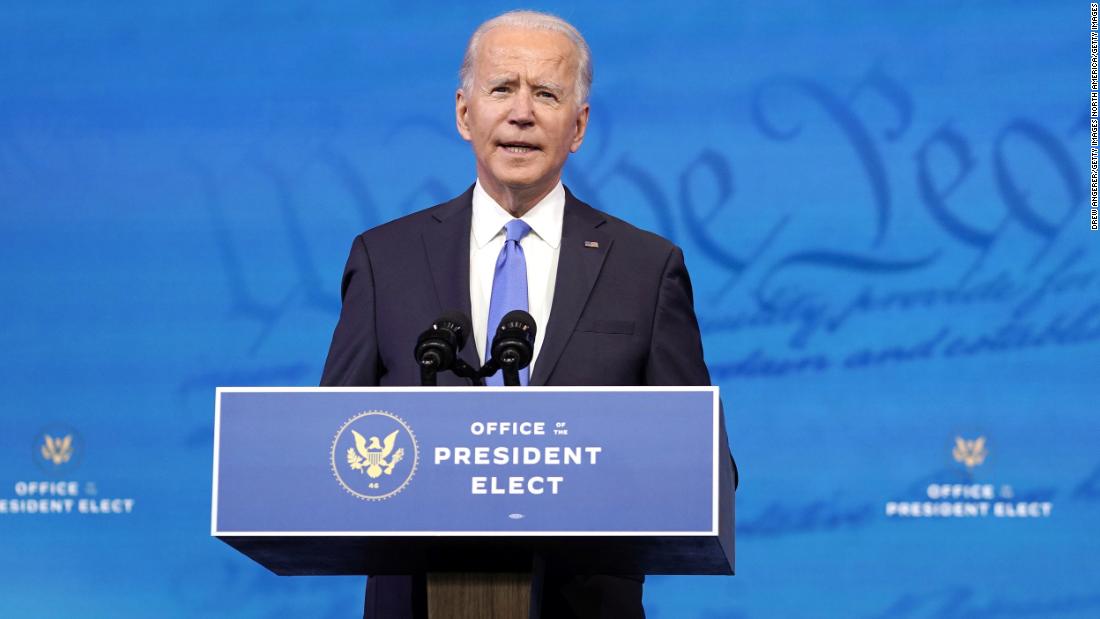 “The flame of democracy was lit in this nation a long time ago. And we now know nothing, not even a pandemic or an abuse of power, can extinguish that flame,” Biden said.

In a speech Monday night in Delaware, Biden issued a stern condemnation of Trump and his Republican allies — including 17 state attorneys general and 126 members of Congress who backed a baseless Texas lawsuit seeking to undo other states’ election results — for seeking to undercut the democratic process.

He condemned attacks by Trump and his supporters, who have sought to throw out legitimately cast ballots, on state and local elections officials.

“It is my sincere hope we never again see anyone subjected to the kinds of threats and abuse we saw in this election. It’s simply unconscionable,” Biden said.

He sought to move past Trump’s denials of reality, pointing to record-breaking voter turnout that he said “should be celebrated, not attacked.”

Biden also noted that he won by the same electoral vote count that Trump received in 2016, saying that it was a “clear victory” then and now.

Lawsuits from Trump and his allies were rejected resoundingly in state and federal courts.

“And yet, none of this could stop baseless claims about the legitimacy of the results,” Biden said.

Biden’s speech came hours after the Electoral College voted 306-232 in his favor, with each state’s electors following the popular vote results.

Biden declared it time to “turn the page, to unite, to heal.”

“In this battle for the soul of America, democracy prevailed,” Biden said. “We the people voted. Faith in our institutions held. The integrity of our elections remains intact. And so, now it is time to turn the page. To unite. To heal.”

The President-elect also laid out the work that will dominate the early days of his administration: the battle against the coronavirus pandemic, including distributing vaccines and slowing its spread as those vaccines become available, and rebuilding an economy battered by the pandemic.

“There is urgent work in front of all of us,” he said. “Getting the pandemic under control to getting the nation vaccinated against this virus. Delivering immediate economic help so badly needed by so many Americans who are hurting today —  and then building our economy back better than it ever was.”