By Lauren Fruen For Dailymail.com and Wires

The price of U.S. oil crashed into negative for the first time in history Monday as demand dries up and producers effectively pay buyers to take barrels off their hands.

In the latest never-before-seen number to come out of the economic coma caused by the coronavirus pandemic, the cost to have a barrel of U.S. crude delivered in May plummeted to negative $37.63. It was at roughly $60 at the start of the year.

Traders are still paying $20.43 for a barrel of U.S. oil to be delivered in June, which analysts consider to be closer to the ‘true’ price of oil.

For the key energy hub in Oklahoma barrel prices for November ended at $31.66, and while still low, the bounce back is indication experts believe the economy could be on the road to recovery by then.

Oil is traded on its future price. The May futures contract expires Tuesday, exacerbating the volatility.

By Monday evening US oil prices had rebounded back above zero. 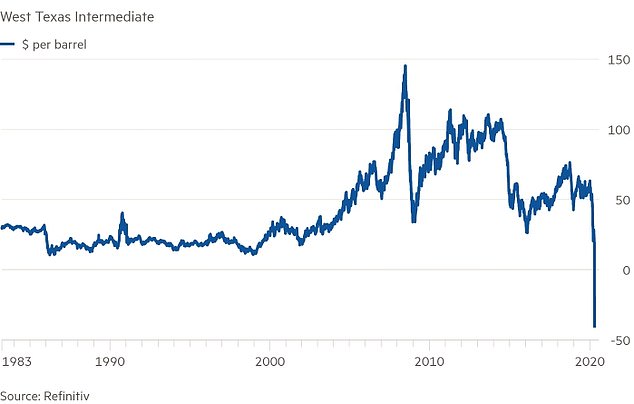 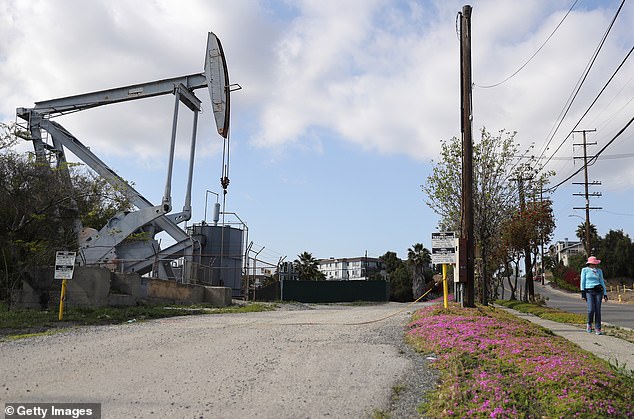 Why did the price of oil plummet and what happens when a futures contract expires?

When a futures contract expires, traders must decide whether to take delivery or roll their positions into an upcoming contract.

Usually this process is relatively uncomplicated, but the May contract’s decline reflects worries that too much supply could hit the markets, with shipments out of OPEC nations like Saudi Arabia booked in March set to cause a glut.

Available storage space is dropping fast at the Cushing, Oklahoma hub, where physical delivery of U.S. oil barrels bought in the futures market takes place. Four weeks ago, the storage hub was half full – now it is 69% full, according to U.S. Energy Department data.

Traders fled from the expiring May US oil futures contract in a frenzy on Monday, sending the contract into negative territory for the first time in history, as barely any buyers are willing to take delivery of oil barrels because there is no place to put the crude.

Monday’s sharp decline is a result of May’s futures contract closing Tuesday, when trading contracts for it expire and the earliest delivery they’ll be able to buy is for June.

Traders fled from the expiring May US oil futures contract in a frenzy on Monday, sending the contract into negative territory for the first time in history, as barely any buyers are willing to take delivery of oil barrels because there is no place to put the crude.

They are quickly running out of places to store crude to be delivered next month with storage tanks close to full amid a collapse in demand as factories, automobiles and airplanes sit idled around the world.

Tanks at a key energy hub in Oklahoma could hit their limits within three weeks, according to Chris Midgley, head of analytics at S&P Global Platts.

Because of that, traders are willing to pay others to take that oil for delivery in May off their hands, so long as they also take the burden of figuring out where to keep it.

‘Almost by definition, crude oil has never fallen more than 100%, which is what happened today,’ said Dave Ernsberger, global head of pricing and market insight at S&P Global Platts.

‘I don’t think any of us can really believe what we saw today,’ he said. ‘This kind of rewrites the economics of oil trading.’

Brent crude, the international standard, fell nearly 9% to $25.57 per barrel.

The plunge in oil sent energy stocks in the S&P 500 to a 3.7% loss, the latest in a dismal 2020 that has caused their prices to nearly halve.

‘The people who are long are desperate to get out,’ said Phil Verleger, a veteran oil economist and independent consultant. ‘If you don’t have storage you have to get out.’ 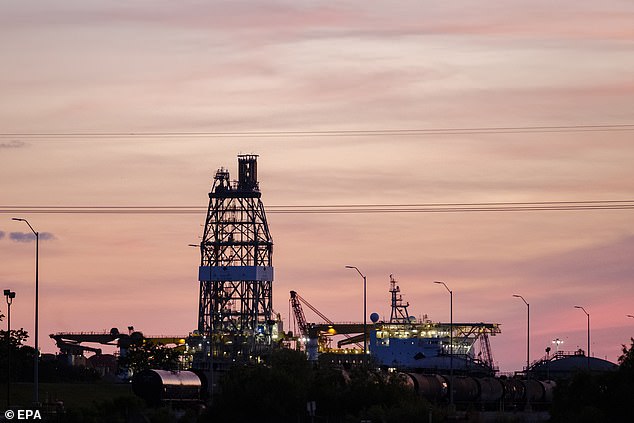 An oil drilling platform is docked near a refinery in Pascagoula, Mississippi. In the latest never-before-seen number to come out of the economic coma caused by the coronavirus pandemic the cost to have a barrel of U.S. crude delivered in May plummeted to negative $37.63 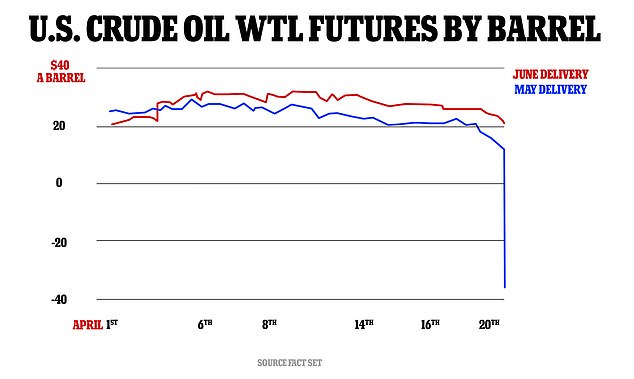 Major oil-producing nations have agreed to cut output and global oil companies are trimming production, but those cuts do not begin until May.

Saudi Arabia is ramping up deliveries of oil, including big shipments to the United States.

Worldwide oil consumption is roughly 100 million barrels a day, and supply generally stays in line with that. But consumption is down about 30% globally, and the cuts so far are far less.

The Dow drops more than 500 points amid the coronavirus pandemic

Stocks and Treasury yields also dropped on Wall Street, with the S&P 500 down 1.8%.

The losses ate into some of the big gains indexes have made since late March, driven lately by investors anticipating the potential reopening of businesses as infections level off in hard-hit areas. Pessimists have called the rally overdone, pointing to the severe economic pain sweeping the world and continued uncertainty about how long it will last.

‘The government can declare whatever they want in terms of encouraging people to get out and do stuff,’ said Willie Delwiche, investment strategist at Baird. ‘Whether or not broad swaths of society do that remains to be seen. It’s going to take seeing people start to get out and do stuff again. That will be the necessary positive development, not just declaring getting things open.’

More gains from companies that are winners in the new stay-at-home economy helped limit the market’s losses. Netflix jumped 3.4% to set another record as people shut in at home look to fill their time. Amazon added 0.8%.

In a sign of continued caution in the market, Treasury yields remained extremely low. The yield on the 10-year Treasury slipped to 0.62% from 0.65% late Friday. 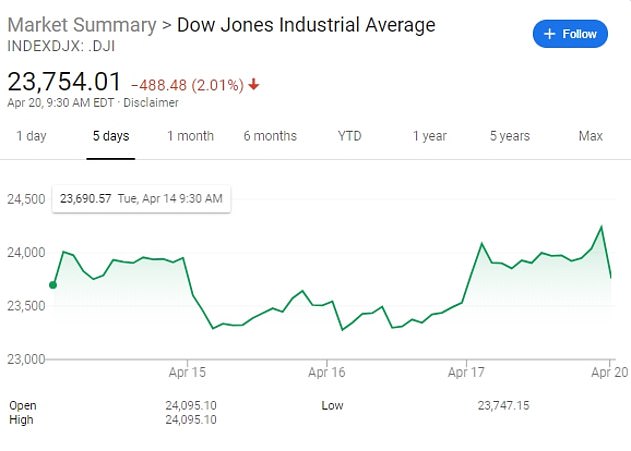 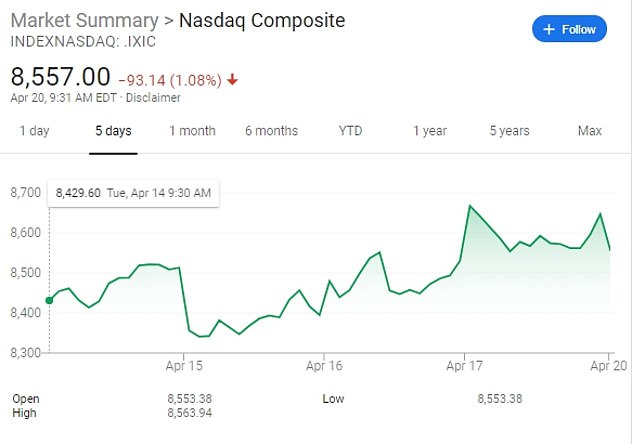 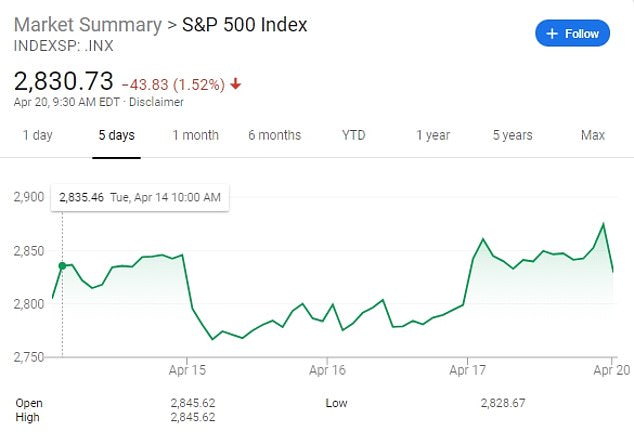 Stocks have been on a general upward swing recently, and the S&P 500 just closed out its first back-to-back weekly gain since the market began selling off in February. Promises of massive aid for the economy and markets by the Federal Reserve and U.S. government ignited the rally, which sent the S&P 500 up as much as 28.5% from a low on March 23.

More recently, countries around the world have tentatively eased up on business-shutdown restrictions put in place to slow the spread of the virus.

But health experts warn the pandemic is far from over and new flareups could ignite if governments rush to allow ‘normal’ life to return prematurely. The S&P 500 remains nearly 17% below its record high as millions more U.S. workers file for unemployment every week amid the shutdowns.

Many analysts also warn that some of the the recent rally for stocks is due to expectations the economy will pivot quickly and rebound sharply once economic quarantines are lifted. Those could prove to be too optimistic.