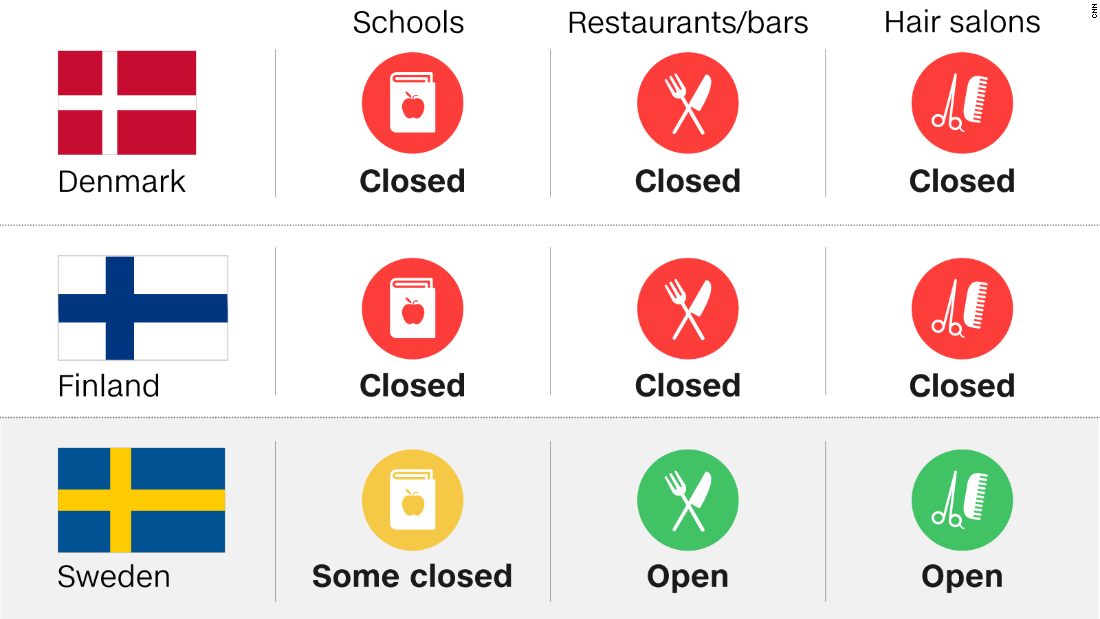 On April 7, the government introduced a bill allowing it to act quickly and take decisions on temporary measures where needed. Care home visits were banned from April 1 and the Ministry of Health and Social Affairs asked people to refrain from non-essential travel, adding: “Keep your distance and take personal responsibility.”

The death rate in Sweden has now risen significantly higher than many other countries in Europe, reaching more than 22 per 100,000 people, according to figures from Johns Hopkins University, controlled for population.

By contrast, Denmark has recorded just over seven deaths per 100,000 people, and both Norway and Finland less than four.

Sweden has registered 18,926 coronavirus cases and 2,274 deaths among its population of 10.3 million people.
Denmark has had 9,049 cases and 427 deaths in a population of 5.8 million, Norway 7,599 cases and 206 deaths among its 5.4 million people, and Finland 4,695 cases and 193 deaths in its population of 5.5 million.
Denmark and Norway are now beginning to ease their lockdowns, with children returning to school in the past 10 days, in smaller classes with markers to help keep them two meters apart. Salons and other businesses with one-to-one contact will reopen in Norway from Monday. Finland has extended its restrictions until May 13.
Further afield the Czech Republic, which has a similar-sized population — 10.7 million — to Sweden, has recorded 7,449 cases and 223 deaths — around two deaths per 100,000 people. It took a markedly different approach to the pandemic by shutting schools, closing restaurants and bars and most stores, restricting travel and ordering mandatory quarantines for travelers from at-risk regions in early March. It has also made it compulsory for people to wear face masks in public.
Sweden has not had as many deaths as Italy or Spain, which have recorded around 45 and 51 deaths per 100,000 people respectively, or even the UK, where there have been about 32 deaths per 100,000 of the population. But there are various complex differences between Sweden and these countries that make direct comparisons harder, such as Italy having an older population, more smokers, and a larger number of close-knit multigenerational households. 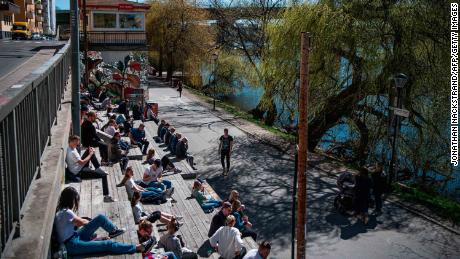 People enjoy the warm spring weather as they sit by the water at Hornstull in Stockholm on April 21.

On March 28, a petition signed by 2,000 Swedish researchers, including Carl-Henrik Heldin, chairman of the Nobel Foundation, called for the nation’s government to “immediately take steps to comply with the World Health Organization’s (WHO) recommendations.”

The scientists added: “The measures should aim to severely limit contact between people in society and to greatly increase the capacity to test people for Covid-19 infection.”

“These measures must be in place as soon as possible, as is currently the case in our European neighboring countries,” they wrote. “Our country should not be an exception to the work to curb the pandemic.” 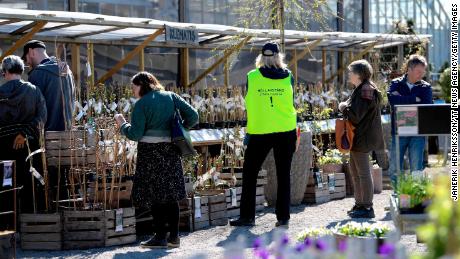 An employee wears a vest reading “Keep distance. Stop Covid-19” as customers look at plants at the Slottstradgarden Ulriksdal garden centre in the Ulriksdal Palace park in Stockholm on April 21.

The petition said that trying to “create a herd immunity, in the same way that occurs during an influenza epidemic, has low scientific support.”

Swedish authorities have denied having a strategy to create herd immunity, one the UK government was rumored to be working towards earlier on in the pandemic — leading to widespread criticism — before it enforced a strict lockdown.

Lena Hallengren, Swedish Minister for Health and Social Affairs, told CNN: “There is no strategy to create herd immunity in response to Covid-19 in Sweden. Sweden shares the same goals as all other countries — to save lives and protect public health.”

Jan Albert, a professor in the Department of Microbiology, Tumor and Cell Biology at the Karolinska Institutet, told CNN: “It’s clear that Sweden had more deaths [than many other European countries] up until now, and that’s probably at least in part because we haven’t had as strict a lockdown and not a lockdown enforced by law.”

But he said he believed the majority of scientists in Sweden had been “relatively quiet” about the herd immunity plan because they thought it could work. 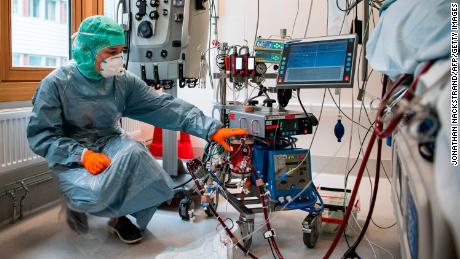 A nurse checks on a Covid-19 patient in the Extracorporeal Membrane Oxygenation (ECMO) department of the Karolinska Hospital in Solna, near Stockholm, Sweden, on April 19.

“What’s the strategy of the other countries?” he asked. “It [herd immunity] was already the only thing that will eventually stop this, unless there is a vaccine in time, which is quite unlikely.

“The truth is that no one, no one in Sweden, no one elsewhere either, knows what the best strategy is. Time will tell.”

He said that he believed that stricter lockdowns “only serve to flatten the curve and flattening the curve doesn’t mean that cases disappear — they are just moved in time.”

“And as long as the healthcare system reasonably can cope with and give good care to the ones that need care, it’s not clear that having the cases later in time is better.” 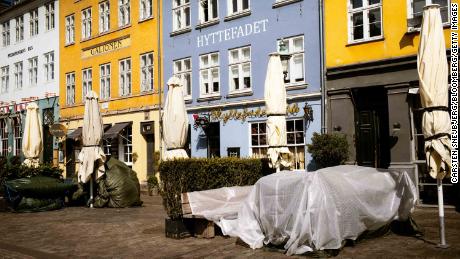 Tables are covered up outside shuttered restaurants in the popular tourist area of Nyhavn in Copenhagen, Denmark, on April 15.

Albert believes that Sweden’s healthcare system is coping, as does Peter Lindgren, managing director at the Swedish Institute for Health Economics (IHE). Lindgren told CNN that the number of people treated in intensive care units over several weeks had been stable, “so in that aspect it has to be successful.”

But he added: “What it failed at, I think, is that there has been disease transmitted into elderly care facilities. We have deaths occurring as a consequence of that.”

Hallengren, the Swedish health minister, told CNN: “One of the main concerns now in Sweden is to strengthen the protection for those living in care homes for older people.”

She said it was still “far too early to draw any firm conclusions as to the effectiveness of the measures taken in Sweden.” 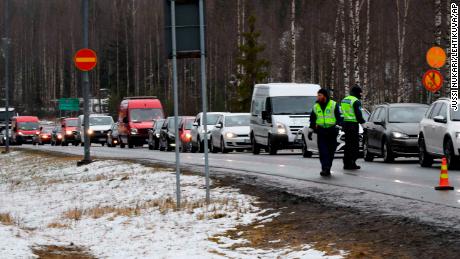 Cars at a traffic control post in Hyvinkaa, Finland, on April 15, during the lockdown of Uusimaa, the nation’s most populous region.

She said that just because Sweden did not have a “full lockdown” did not mean “that it’s business as usual” and that measure were being “continuously reassessed” with the help of experts “to ensure that the right measures are taken at the right time.”

Gatherings of more than 50 people are banned and people are “strongly recommended” to avoid non-essential domestic travel, she added.

Sweden’s foreign minister on Monday told UK newspaper The Guardian that it was far too soon to judge her country’s approach to Covid-19.

“There’s been a lot of misunderstanding,” Ann Linde said. “We have pretty much the same goals as every other government … And as we have always said, we are perfectly ready to go with more binding regulations if the population does not follow.”

She said the fairly high death toll was “certainly not part of the plan” and said the high number of care home deaths was “one area where we have failed.”

The Swedish Public Health Agency this week forecast that almost a third of people in Stockholm County would have been infected by Covid-19 by May 1. That would be more than 600,000 people — far higher than the number of cases recorded nationally so far.
Less than 24 hours later, there was confusion when the health agency announced on Twitter that it had “detected errors” in the report, but it then said its mathematical model had been updated and reiterated that 26% of the Stockholm population would have been infected by May 1.

It said that there were approximately 75 unconfirmed cases for each reported case of Covid-19 — but that the peak of the spread of infection had passed.

Sweden’s state epidemiologist Anders Tegnell said on Friday that his country would likely be in a better place to withstand a second wave of coronavirus because so many people in Sweden have now been exposed to the virus.

He told the BBC that the relatively relaxed approach had “worked in some aspects,” since there had always been at least 20% of intensive care beds empty and able to take care of Covid-19 patients.

“We believe we passed the peak of the transmission a week ago,” he added.

Asked whether Sweden’s approach will help it withstand a possible second wave, Tegnell said he believed it would. “It will definitely affect the reproduction rate and slow down the spread,” he said, but added that it wouldn’t be enough to achieve “herd immunity.”

“We know very little about the immunity of this disease, but most of the experts in Sweden agree that some kind of immunity we definitely will have because a lot of people that have been tested so far have produced antibodies … We hope this will make it easier for us in the long run.”

Asked whether the death toll would have been lower if Sweden had followed the same path as other European countries in introducing strict restrictions, Tegnell replied: “That’s a very difficult question to answer at this stage. At least 50% of our death toll is within the elderly homes and we have a hard time understanding how a lockdown would stop the introduction of the disease into the elderly homes.”

Whether Sweden’s Covid-19 strategy has succeeded or failed may not be clear for months to come, but as countries across the globe count their dead and wonder whether they could have done more to halt the spread of the virus, the world will be watching.

This story has been updated with the latest figures. It has also been updated to correct that the geographical area covered by the Swedish Public Health Agency’s forecast was Stockholm County.