A close ally of Jeremy Corbyn has today quit as Labour’s general secretary declaring it is the ‘right time’ to resign while new leader Sir Keir Starmer reshapes the party.

Jennie Formby said that her two years in the role had been a ‘huge privilege’ and wished Sir Keir the ‘very best of luck’ in leading Labour into the next general election.

Her time as general secretary, which began in 2018, saw the party rocked by anti-Semitism claims and rows over Mr Corbyn’s leadership – she also underwent chemotherapy in the tumultuous period.

‘When I applied for the role of general secretary in 2018 it was because I wanted to support Jeremy Corbyn, who inspired so many people to get involved in politics with his message of hope, equality and peace,’ she said in a statement.

‘It has been a huge privilege to be general secretary of the largest political party in Europe for the last two years, but now we have a new leadership team it is the right time to step down.

‘I would like to thank Jeremy, our members and my staff colleagues who have given me so much support during what has been a very challenging period, in particular when I was suffering from ill health.’

Ms Formby took the job at a time when the party had failed to stamp out anti-semitism and her resignation came days after more than 30 whistleblowers were exposed in a leaked report into the party’s handling of the crisis.

She is said to be one of the individuals considering suing the party having warned party members that anyone sharing the report on an unauthorised basis risks ‘potential significant civil liability’. 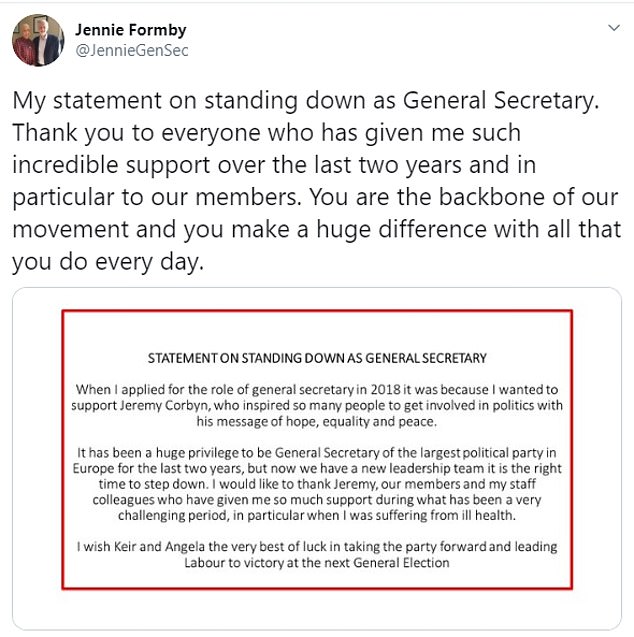 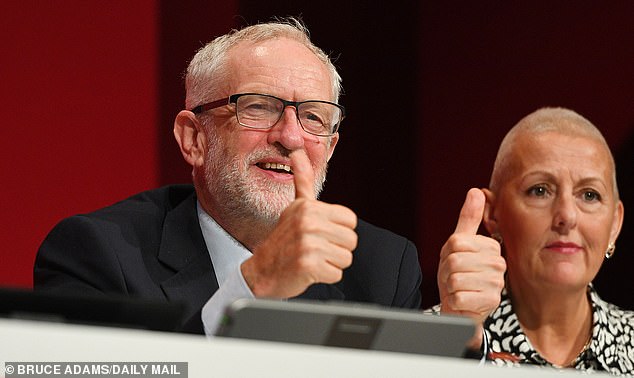 Ms Formby, pictured with Jeremy Corbyn at the party conference in 2019, quit days after a controversial party dossier on anti-Semitism was leaked

Sir Keir thanked her for ‘the personal and professional efforts she has made in advancing the cause she has fought all her life for’.

‘Jennie has led our party’s organisation with commitment and energy through a period of political upheaval, including a snap general election last year. I wish her the very best for the future,’ he added.

The resignation comes as Labour investigates the leaking of a controversial dossier on anti-Semitism, which blamed ‘factional opposition’ towards Mr Corbyn and hindered efforts to tackle the crisis.

Labour has been forced to defend its data protection handling and work with the Information Commissioner’s Office over the leak, with legal challenges threatened by those named in the report.

Deputy leader Angela Rayner said Ms Formby had been ‘a great servant of our movement for many years and blazed a trail as one of our highest achieving women’.

‘She goes with our thanks and gratitude, and I’ve no doubt she will stand squarely behind us as we continue to fight for social justice and the Labour government our country so desperately needs,’ Ms Rayner added.

Anti-semitism within the Labour Party was so rife that the views of some members could only be compared to those of ‘Neo-Nazis’, a damning internal report found last month.

Nearly 900 party members have been investigated or suspended in the last three years – many for holding ‘disturbing’ extremist views. Some 63 have been expelled for antisemitism.

The report, leaked to the Daily Mail, which follows an investigation into the party by the Equality and Human Rights Commission, says prejudice against Jews had ‘manifested within the Labour Party and on the Left of British politics’.

It states: ‘The events which led to this investigation, including the Party becoming host to a small number of members holding views which were unarguably hostile to Jewish people and in some cases frankly neo-Nazi in their nature, are deeply disturbing.

‘This has caused great pain to the Jewish community. The Party must take all possible steps to repair this damage, and apologise for failing to take action sooner.’ 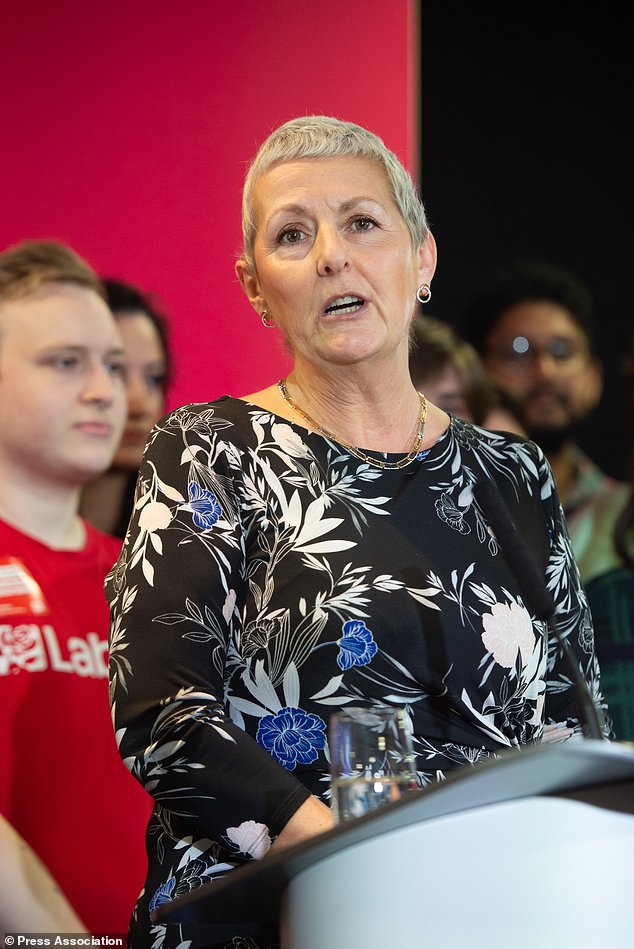 The report – a review of the Labour Party’s Governance and Legal Unit between 2014 and 2019 – found Labour was initially slow to take disciplinary action.

Only 10 members were suspended and 22 faced notices of investigation in 2017. But numbers swelled hugely under new general secretary Jennie Formby, who took over in 2018.

Between 2016 and 2018, there was said to have been a lack of ‘consistent systems’ for logging complaints, mounting investigations or decision-making’. Some complaints were felt to be ‘victimisation’.

Of more than 300 complaints between November 2016 and February 2018, just 34 resulted in formal investigations.

Labour Against Antisemitism said it is seeking legal action against the party for failing to redact ‘personal and inaccurate information regarding some of our activists’.

Sir Keir Starmer  has been praised by Jewish leaders for achieving ‘in four days more than his predecessor in four years’.