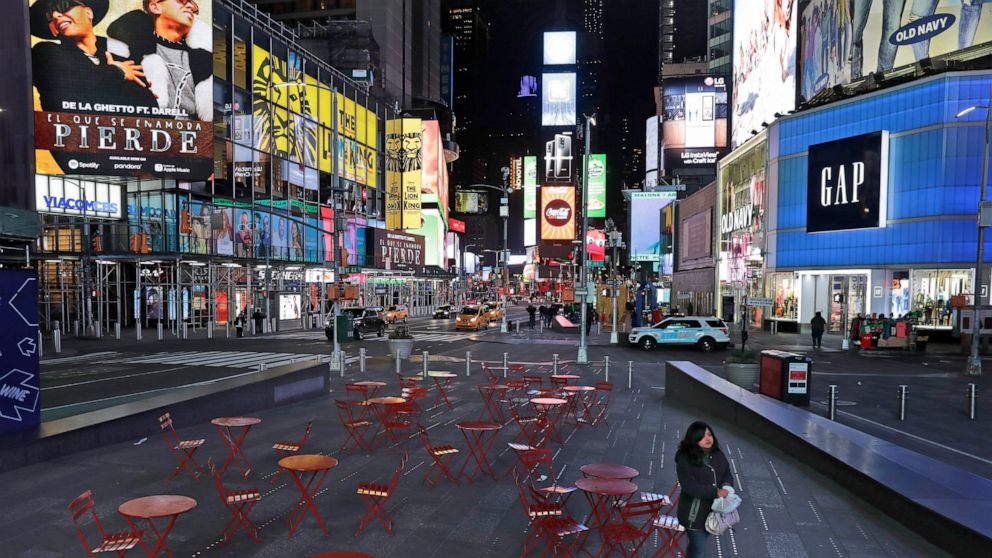 Restaurant have begun to welcome diners, manufacturers are announcing plant reopenings and markets are moving higher all on hopes that the worst of the pandemic is in the past

ARE WE THERE YET?: Decisions about when it’s safe to reopen businesses have created fissures at the federal and state level, but that movement has already begun in dozens of states and across several industries.

— The owner of Outback Steakhouse and other national restaurant chains is opening the doors at hundreds of restaurants in multiple states Tuesday.

— Children’s clothing company Carter’s plans to reopen some of its stores later this week. Although the chain closed its retail stores because of the pandemic. Carter’s has been selling apparel online and through retailers that have remained open, like Target and Walmart.

PERILOUS JOURNEYS: Even as major cruise and airlines prepare for some sort of return to mobility, the economic damage from the outbreak raises questions about what kind of travel industry will emerge.

— United Airlines is planning deep staffing cuts for pilots, managers and administrative staff in October after federal aid to help cover payroll costs runs out. The Chicago carrier warned its 12,250 pilots in a memo to prepare for “displacement” that affects 30% of them, or nearly 3,700 pilots. In a separate memo, United told employees it is planning at least a 30% cut in management and administrative staff, or 3,450 of them. Under terms of $5 billion in federal virus-relief aid, United can’t lay off employees through September.

— Norwegian Cruise Line has “substantial doubt” that it will be able to continue as a going concern without new funding or terms of debt. The cruise operator said in a regulatory filing that it was in compliance with all debt covenants as of March 31, but that it might need additional amendments from lenders. There’s no guarantee Norwegian will get the approval for the amendments, which could lead to an inability to continue operations.

— Virgin Atlantic is planning to cut 3,150 jobs and end its operations at London’s Gatwick Airport because of what it called the most devastating crisis since the company’s first flight 36 years ago.

The airline, which is in the process of applying for emergency loans from the British government, said job losses will be across the board. It’s also planning to reduce the size of its fleet.

SUPPLY & DEMAND: Meat packing plants are getting hit with COVID-19 at the same time that companies are wrestling with a logistical nightmare of supply. That is prompting some retailers to act ahead of potential shortages.

— Some grocers are limiting meat sales in an effort to head off shortages. Costco is temporarily limiting sales of beef, pork and poultry to three items per customer. Kroger — which also owns Ralphs and Harris Teeter markets — is limiting purchases of ground beef and fresh pork.

— Online furniture seller Wayfair is seeing a spike in sales as Americans, stuck at home, renovate living spaces. The company’s revenue jumped 20% in the first quarter and it said demand continued to rise in April.

CENTRAL GOVERNMENTS & BANKS: The seizing up of the global economy is distorting trade and smothering production.

— A survey of private economic analysts by Mexico’s central bank shows they expect the country’s economy to experience a whopping 14.1% contraction in the second quarter. On average, the 38 analysts surveyed expect a net drop in GDP of 7.27% for the year as a whole.

But remittances, Mexico’s largest source of income after manufacturing exports, actually rose in March, despite the tough economic conditions in the United States, where most Mexican migrants work. President Andrés Manuel López Obrador said the money sent home by migrants in March amounted to $4 billion, a 35% rise compared to February.

— The end of most economic activity during April’s strict lockdown drove unemployment in Spain to 3.8 million people, the highest figure in nearly four years.

Altogether 282,891 people registered as jobless in April, or 8% more than a month earlier, according to data published Tuesday by Spain’s Labor Ministry. The jobless statistics don’t include the millions of workers in Spain that have been furloughed or who are working vastly reduced hours.

— Several German states are setting out plans to reopen restaurants and hotels in the coming weeks.

Governor Markus Soeder of Bavaria, the state with Germany’s highest per-capita coronavirus infection rate, said Tuesday that restaurants will be able to serve outdoors starting May 18th. Restaurants can start serving indoors a week later, with limited numbers of customers. Hotels can open May 30, but their saunas, swimming pools and other facilities will remain closed.

— Stocks rallied worldwide on Tuesday as more countries relaxed restrictions on businesses, raising hopes for a recovery from the historic plunge sweeping the global economy.