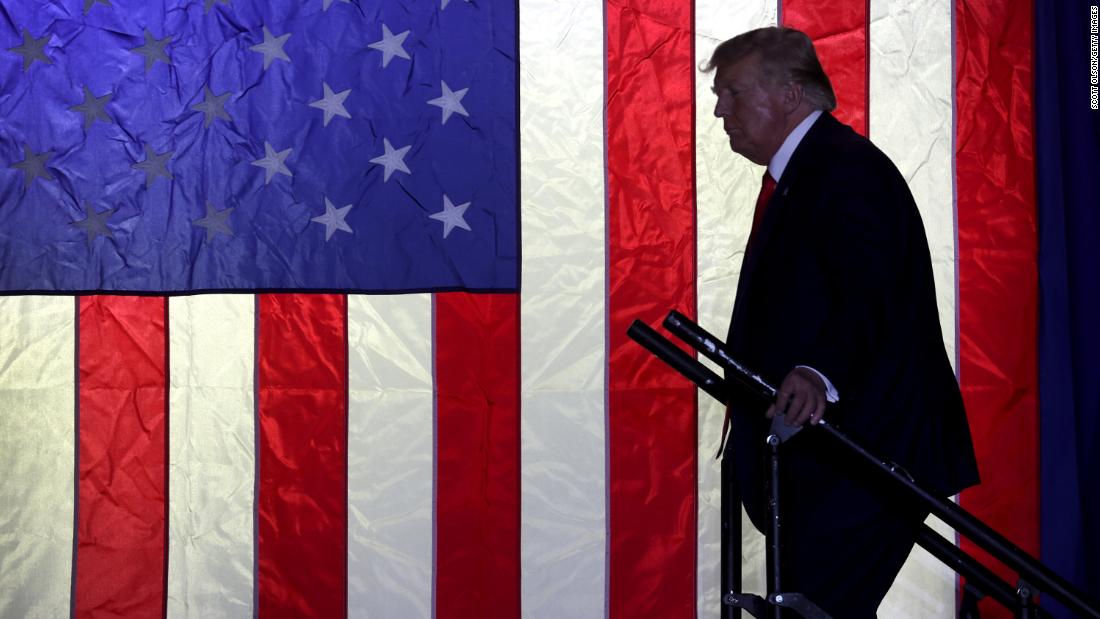 The panel holds its first prime-time televised hearing Thursday in a bid to imprint the implications of this national nightmare — when a mob incited by then-President Donald Trump tried to prevent the certification of 2020 election results — on the minds of citizens.

It plans to show previously unseen video of testimony by former aides to Trump, campaign officials and members of Trump’s family.

Committee aides said they will also roll video of the horrific scenes when pro-Trump rioters smashed their way into the Capitol building on January 6, 2021, beating up police officers and sending lawmakers running for safety.

“We’ll bring the American people back to the reality of that violence and remind them of just how horrific it was,” one aide said.

The panel, which holds its first prime-time televised hearing Thursday in a bid to imprint the implications of this national nightmare on the minds of citizens, has often been compared to the Senate Watergate committee of the 1970s.
In a climactic moment of those televised hearings that transfixed the nation, former White House counsel John Dean told of how he had informed disgraced President Richard Nixon that there was “a cancer” growing on the presidency. Fifty years later, as Washington still reels from the mendacity of another aberrant president, Trump, that cancer is attached to, and is still growing on, democracy itself.

The House committee set out to expose the truth about Trump’s broad plot to tarnish the 2020 election with false claims of voter fraud. House Republicans are so determined to prevent the American people from learning that truth that they are working to discredit the committee with a public relations assault.

On Thursday and in weeks of subsequent hearings the panel is under fierce pressure to establish the depth of Trump’s apparent conspiracy. Its work so far suggests it plans to prove that the attack on the Capitol by a pro-Trump mob was not simply a rally that got out of hand but was the culmination of weeks of chicanery to subvert a free election by a President who called a crowd to Washington and incited an uprising against the American experiment itself.

The committee is racing against the clock, since Republicans who are whitewashing Trump’s role as they seek to win back the House in midterm elections are sure to end its investigation.

But in weeks of behind-the-scenes interviews that have reached deep into Trump’s West Wing, the committee has sought to establish, for example, the level of planning of the Capitol riot on January 6, 2021, and whether there were direct links between the ex-President’s circle and partisan groups like the Proud Boys. Some leaders of the far-right extremist organization were this week charged by the Justice Department with seditious conspiracy in a bid to fracture the democratic transfer of power. Thursday’s hearing will feature testimony of two people who interacted with the group in early 2021.

The hearings are also expected to stress the extraordinary breadth of the attempt to subvert the election, from Trump’s efforts to “find” votes to overturn his loss in Georgia to the extraordinary, and often hair-brained, schemes being pushed by Trump legal associates revealed in hundreds of text messages to then-White House chief of staff Mark Meadows that have been obtained by CNN. While the committee has no powers to lay criminal charges, it could recommend prosecutions of Trump or acolytes in a move that would place the Justice Department in the eye of a political storm in election year.

It would be one thing if the investigation was uncovering the plots and schemes and misdemeanors that took place during a tragedy that was in the past. But the ex-President is still spreading his lies about a stolen election. Many of those who are defending him, including GOP leaders in the House, want to stay in his good graces as they seek a return to power. And Trump is considering another White House campaign that might use the very same anti-democratic methods to claim a new term in office that would likely be more autocratic than the first.

“We are in fact in a situation where he continues to use even more extreme language, frankly, than the language that caused the attack,” committee member Rep. Liz Cheney, the Wyoming Republican and daughter of former Vice President Dick Cheney, told CBS News in an interview this week.

“And so, people must pay attention. People must watch, and they must understand how easily our democratic system can unravel if we don’t defend it.”

The committee faces a big challenge

While the committee has spent months conducting hundreds of interviews with witnesses, fighting legal battles with Trump acolytes who defied subpoenas and plowing through troves of documents, the circumstances of January 6, 2021, are intimately familiar to most Americans. That represents a challenge to the panel in creating a new understanding of the outrage since almost every potential viewer saw Trump trash the election for weeks and watched on television as his supporters marauded through Congress when it was certifying Biden’s 2020 win.

Many Americans are now more preoccupied with current crises, including record gasoline prices, a soaring cost of living and a pandemic that never seems to end, so the chances of the hearings stirring a new political awakening seem low. And many voters long ago made up their minds about Trump, an extremely polarizing figure who draws revulsion but also great partisan loyalty.

The potential political impact of the hearings could be further diluted by the fact that they will be largely ignored by the powerful conservative news machine. Fox doesn’t plan to preempt its regular opinion programming to carry Thursday’s hearing live in its entirety, deferring to hosts who frequently distorted the events of January 6.

But even 17 months on, events from that day remain shocking and historic.

In 2020, a president lost a free and fair election but refused to accept defeat, mounted a prolonged attempt to discredit the result with lies about electoral fraud and then called a crowd to Washington and incited it, ahead of the first attack on the Capitol — the citadel of American representative government — in generations. For the first time in American history, a democratically defeated president tried to thwart the will of voters and disrupted the peaceful transfer of power, a golden thread that separates the United States from totalitarian states around the world.

Given the earth-shaking implications, there was a strong push for the kind of independent commission held after previous national traumas, like the assassination of President John F. Kennedy in 1963 or the September 11 attacks in 2001.

The House passed a bipartisan bill setting up such a panel, but Senate Republican Minority Leader Mitch McConnell effectively killed it off, in implicit recognition of Trump’s strength among Republican voters. House GOP Minority Leader Kevin McCarthy, who — like McConnell — had originally condemned Trump’s role on January 6, then undermined a bipartisan House investigation by naming members like Ohio Rep. Jim Jordan, who participated in Trump’s effort to undermine the election. House Speaker Nancy Pelosi then named two Republicans to the Democratic-led panel, Cheney and Illinois Rep. Adam Kinzinger, who have paid for their willingness to tell the truth about the insurrection by being ostracized by their party.

Broadly, the committee has been investigating the attempt by Trump to discredit the result of the election, why he didn’t quickly intervene to call off the insurrection and a wider attempt by pro-Trump conservative lawyers to subvert the Electoral College and to steal the presidency from Biden in Congress — a plan that then-Vice President Mike Pence, who had the constitutional duty of presiding over the certification of the votes, refused to go along with.

The panel has multiple audiences: Americans who want to know what happened, potential voters in 2022 and 2024 concerned about Trump’s autocratic instincts and posterity.

She said the hearings should focus on “not just January 6, (but) the misinformation campaign, the frivolous lawsuits, the fake electors scheme, the pressure on Mike Pence, the pressure on state legislators and state election officials, the planning of the January 6 rally, the involvement of congressional members … all leading to the insurrection.”

A nation divided over the worst attack on democracy in history

The culmination of the committee’s work is lent extra relevance by Trump’s continuing role as the de-facto leader of the Republican Party and his apparent intent to launch a new White House campaign. Therefore, the hearings have contemporary political as well as legal and historical implications. McCarthy, for instance, needs Trump’s help to become speaker if Republicans win the House in November. The proximity of the midterm vote also adds an extra political dimension, not least because Trump has tainted yet another election cycle with his claims of fraud in 2020 and is making adherence to his lies about a stolen election the price of entry for GOP candidates who want his endorsement.

A strong statement from the committee debunking Trump’s false claims would weaken the claims of Republicans he is seeking to leverage into positions of power in the states and in state legislatures to influence the administration of the 2024 election. Around the country, Republican leaders have meanwhile sought to use Trump’s lies as the foundation of efforts to suppress voting and to rein in options like mail-in balloting popular with Democratic voters.

The deeply politicized mood in the country about Trump probably means the committee’s eventual findings will also be viewed through a partisan lens. A poll in April from the Washington Post and ABC News found that 40% of Americans believed the committee was conducting a fair and impartial investigation while 40% disagreed. In a CBS/YouGov poll in May, 89% of Democrats said it was at least somewhat important to find out what happened on January 6, 2021, while only 48% of Republicans believed so.

This kind of national fracturing helps explain why the January 6 hearings almost certainly won’t have the same effect the Watergate television blockbusters had in 1973, which ultimately helped forced the resignation of Nixon.

Yet, for the broader fate of American democracy, they might be even more important. In the conversation with Nixon that Dean referenced, caught on the taping system that ultimately led to the ex-President’s downfall, the ex-White House counsel said this: “There is a cancer within — close to the presidency, that’s growing. It’s growing daily. It’s compounding.”

Swap the word presidency for “democracy” and you have a fair summation of the dark political environment awaiting the House committee’s finding in 2022 and the critical importance of its mission.